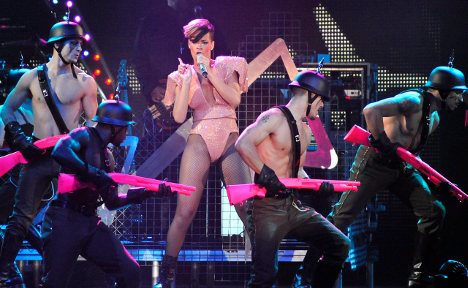 Up the Kaiser's alley? Rihanna performs at the Frankfurt Festhalle in 2010. Photo: DPA
But if the city wants to hear homegrown hits like 'With peppermint I am your prince' performed live again it must build a new concert hall fast, warns German rock legend Marius Müller-Westernhagen.
"In terms of acoustics, the Festhalle is the worst in Germany," the 66-year-old rocker said as he prepares a new tour of German cities – bar the fifth largest.
"I won't perform again in Frankfurt until they build a hall that you can actually cover with sound," vowed Westernhagen, who shot to fame in the 1970s, has sold over 11 million albums and is revered as one of the most successful German musicians ever.
No matter that the Festhalle will this year host performances by André Rieu, Queen, Lionel Richie, Simply Red and Ennio Morricone – the New Year lashing over acoustics has set the management on the back foot.
"Good acoustics depends on good sound engineering," Markus Quint, spokesman for the Frankfurt Conference Centre which runs the hall, told The Local. And this is the responsibility of the individual artist, he stressed.
"Concerts here by Pink Floyd and Pavarotti had outstanding sound quality," Quint added in defence of the 6,000 square-metre hall, which can stage concerts for 13,500 people, as well as conferences, trade fairs and even show jumping events.
Nor was he aware of plans to build a new venue in the city, although there has been some discussion. So like it or lump it Herr Westernhagen, it seems.
'Grand old lady' isn't yielding
Designed by architect Friedrich von Thiersch and opened in 1909, the Festhalle is an historic cornerstone of Frankfurt's cultural life.
"Even at the ripe old age of 100, the ‘grand old lady’ of event halls is still going strong," the hall's website states proudly.
And having also hosted MTV Europe Music Awards in 2012, complete with a performance of 'Gangnam Style'  by South Korean artist Psy, it shows no sign of giving up its musical mantel. Meanwhile, fellow rock veteran Herbert Grönemeyer  – who tops even Westernhagen with 13 million albums sales in Germany – is unphased by the issue and is slated to play here in May.
"Shame that the Frankfurt concert will be at the Festhalle, the acoustics are a catastrophe," Grönemeyer fan Denise wrote about the tour on the 58-year-old performer's Facebook page.
Despite the hall's rich history, it seems many others agree with her. In a reader survey conducted by the Frankfurter Rundschau newspaper this week, 47 percent said the acoustics were a mess, and 39 percent agreed that sound quality depends on the set-up of individual performers. Only 14 percent said Westernhagen was off the mark.
Train station vibe?
Reviews of past concerts add grist to the acoustic gripe mill.
Deep Purple fan Thomas Memleb saw his heroes perform at the Festhalle with the Romanian Philharmonic Orchestra in 2000 and found the event "amazing, fantastic, superb!"
"The only bad point was the abominable acoustics of the Festhalle, the building sounds about as 'echo-ey' as a railway station, only there are no trains in it," he wrote on a band forum.
True, sheer crowd enthusiasm can drown out the music. Consider The Beatles' 1966 concert at Shea Stadium in New York, when the hysteria was so great that no-one, including the Fab Four, could really hear the songs.
The Festhalle has had some of that too in its time.
"Jimmy Page tried to calm down the audience, which was completely freaking out, with his words 'Please give us a chance…' after having played some gentle chords which he obviously couldn't hear," a German soldier wrote after seeing Led Zeppelin play here 25 years ago. "This was 1980 and the in-ear monitor wasn't invented yet."
Westernhagen at least should have no problems cutting through the hubbub with a decent surround sound. For a comeback tour in 2000, his crew built a 570-tonne stage with catwalks and a 200,000-watt sound capacity.
But if some may think his rock star legend status is bringing out the prima donna in him, he feels differently.
"I'm just a musician, get up in the morning, look in the mirror and it's just me, no stars in sight," he told the news agency dpa amid his tirade against the Festhalle.