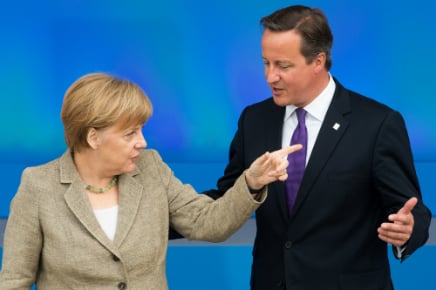 The visit next Wednesday will focus on bilateral, European and international issues and on preparations for a G7 summit Germany hosts in Bavaria state on June 7-8, the statement said.

London and Berlin have recently been at odds over plans by Cameron's government to limit immigration from within the European Union.

Merkel reportedly told Cameron in October that he was approaching a "point of no return" with the EU over a proposal to limit the migrant intake from other member states.

Cameron promised tough curbs on welfare for EU migrants in a speech in late November but stopped short of calling for a cap on new arrivals.

He has also promised to hold an in-or-out referendum on Britain's EU membership in 2017 if he wins a general election in May.

While in London, Merkel also plans to visit the exhibition "Germany: memories of a nation" at the British Museum which traces 600 years of German history until the 1989 fall of the Berlin Wall.

SEE ALSO: Six Stories That Will Grip Germany in 2015