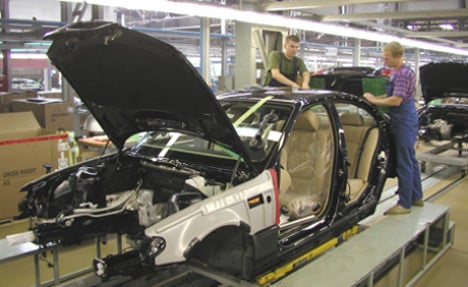 Thirty-six percent of 200 firms polled in December by the German-Russian Chamber of Commerce expected to cancel projects due to the situation in Russia.

And 58 percent said they had been hurt by the sanctions, which began in March after Moscow's annexation of Crimea and grew in response to Moscow's support for pro-Russia rebels in eastern Ukraine.

Car makers Opel and Volkswagen are also among those now freezing, scaling back or closing Russia operations, including laying off Russian staff.

But the number of firms abandoning the country altogether is still only about three percent of the total, the chamber notes.

"Despite sharp changes to market conditions German enterprises are standing firmly by the Russian market," the chamber's president, Rainer Seele, said on December 18 in a week that saw the ruble fall by almost 20 percent against the dollar.

Since 1992 more than 6,000 German companies set up operations in Russia, which became a major customer for German cars, pharmaceuticals and machinery. Germany is Russia's third biggest foreign trade partner after China and the Netherlands.

But opinion remains heavily divided abroad and even within governments about the effectiveness of economic sanctions against Russia.

On the eve of last week's EU summit in Brussels, Chancellor Angela Merkel said sanctions would remain in place as long as Russia continued to violate principles of international law and respect.

“Anyone who believes that forcing Russia economically to its knees will lead to more security in Europe is very much mistaken,” Steinmeier told Spiegel magazine this month. And as the falling oil price also threatens Russia with a steep recession in 2015, knock-on negative effects are also likely for Germany's economy.

Ten percent of all German companies export to Russia, but overall exports in October fell by 22 percent.

Including other companies like BMW, Mercedes and the Cologne-based Ford of Europe, German automakers stand to lose 15 billion euros in Russian sales and €600 million in profit through 2017, Ferdinand Dudenhöffer, a professor at the University of Duisburg-Essen, told the New York Times.

German retailer Metro has also postponed a listing of its Russian unit on the London stock exchange.

Forty-one percent of German companies in Russia have slowed investment there, while 36 percent said they would cancel projects unless conditions improved. Another 28 percent said they planned to lay off Russian workers.

Meanwhile, some Russian companies are also rethinking their relations with European partners amid the geopolitical.
As relations with the West deteriorate, some ten percent of German companies' time-tested Russian partners are reorienting to Asiatic market, the president of the Association of German Chambers of Commerce and Industry (DIHK), Volker Treier, told Bild newspaper on Sunday.
SEE ALSO: Merkel to meet Putin in January over Ukraine