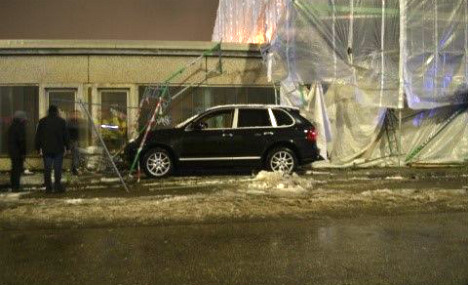 With the Bavarian capital firmly in winter's grip, it's best to steer well clear of other vehicles. Hence the fateful decision of the 37-year-old driver of a Porsche Cayenne to pull over and let an approaching car pass.

First her two-tonne luxury SUV hit a parked Opel Astra, shunting it into a Mini Cooper, a police report said on Monday.

The panicked driver then stepped on the accelerator and shot off down the icy street before crashing once more into the line of parked cars.

The impact spun three more vehicles across the road, prompting her to steer wide of them too and mount the pavement.

The Porsche finally came to a rest after ramming into an assembly of building scaffolding, depositing loose poles onto the already battered Mini.

No one was injured in the accident – or series of accidents – although the damage tally will put a damper on the driver's year. Police estimated the total cost at €70,000.