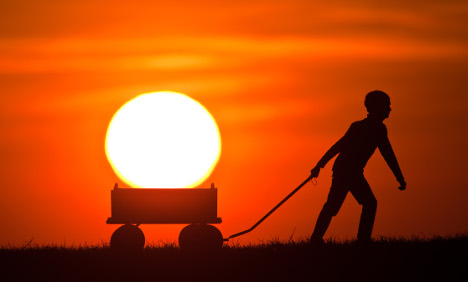 Warm memories of 2014? Photo: DPA
The average temperature reading in 2014 was 10.3 degrees Celsius, the highest since meteorological records began in 1881, the German Weather Service (DWD) in Offenbach reported on Tuesday.
The closest contenders were 2000 and 2007 with 9.9 degrees.
This year winter effectively by-passed some northern and eastern parts of the country in January and February, followed by a dry spring, a scorching summer and an autumn that was conspicuously lacking in storms.
The hottest day of the year was the June 9 Whit Monday public holiday, when the mercury hit 37.7 Celsius near the southwestern town of Baden-Baden.
Also in Baden-Württemberg, the coldest night of the year fell on December 29 in Altheim, where the temperature plummeted to minus 24.9.
By states, North Rhine-Westphalia was the warmest with an average of 10.9 degrees, and Bavaria the coolest with 9.6.
But it's not over til its over: Authorities in some parts of the country issued heavy snowfall warnings on Tuesday.
Parts of Bavaria are expected to get from 20 to 50 centimetres of snow from Tuesday to Wednesday. The cold front has caused chaos at Munich Airport, where dozens of flights were cancelled and planes rerouted on Tuesday.

While the Alps and other parts of the south are forecast to shiver out the year with minus 3-8 degrees, many areas up to the north coast should post temperatures above zero, rising to 5 degrees in Berlin with possible rain showers.

Meanwhile, winter's cold extremes have produced some newsworthy hot heads.
Alarmed motorists on an Autobahn near Munich on Sunday had to alert the driver of a public bus with hand signals to the fact that he was towing a man on a sledge.
Unbeknownst to the driver, the 21-year-old hooked up his sledge to the vehicle with a five-metre rope before it left the city's central bus depot, the Merkur newspaper reported.
After a few kilometres the driver pulled over on the hard shoulder of the A96 where the miraculously unhurt joyrider was detached for questioning by police.