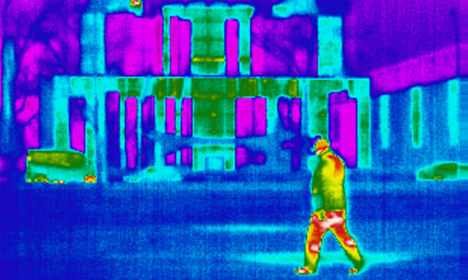 The Chancellery under heat vision. Photo: DPA
Government spokesperson Christiane Wirtz said that the IT system of the Chancellery, where Angela Merkel conducts her work, was not infiltrated no other employees were targeted in the malware attack.
They also said it was different from the bug that allowed Merkel's mobile telephone to be tapped by the American spy agency.
The latest federal government cyber espionage was carried out by software called Regin. A senior figure of the European unit in the chancellory took some documents on a personal USB stick home one day. According to Bild, it was a speech on strategies in the Europan Union. Officials say the virus was transmitted through her home computer.
When the woman came into work, her government computer identified the virus on her computer.
Regin is known as a fishing programme associated with the NSA as well as its British counterpart, GCHQ.
They have not yet confirmed whether any documents were stolen through the virus.
Regin"is named after the dwarf of Norwegian lore with the same name, who was known for his wits and cunning. It targets users of Windows-based computers. According to reports, it is best suited to long-term mass surveillance operations.
Investigators have yet to find the person or people behind the attack.
Regin is suspected to have been used in online surveillance on EU citizens and institutions that was detailed by documents released by NSA whistle-blower Edward Snowden.
Wirtz did not comment on any disciplinary consequences faced by the employee.
No other computers were found to contain traces of the malware.