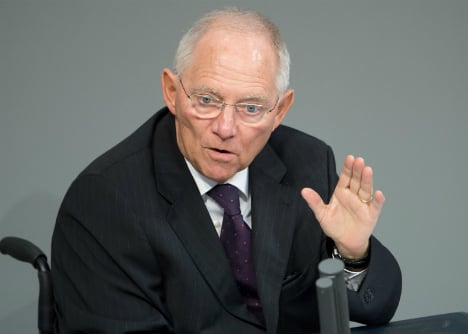 "These tough reforms are bearing fruit, they have no alternative," Schäuble said in a statement – the first official government reaction to events in Athens.

"New elections change nothing in the accords struck with the Greek government" for an international bailout of the debt-mired country, he added.

Greek lawmakers failed for a third time Monday to elect a new president, triggering a snap election that could bring to power a radical anti-austerity party threatening to undo many economic reforms.

The European Union called on Greek voters to stick by the reforms adopted as part of a massive international rescue package for the eurozone member state.

Germany, as the paymaster for eurozone bailouts, has spearheaded a drive to demand swingeing spending cuts in exchange for any aid, arguing that budgetary discipline offered the only long-term solution to the debt crisis.

The pain experienced by ordinary Greeks as a result of the reform programmes has helped fuel support for the far-left party Syriza.

Syriza, which declined to vote in the presidential election in order to force snap polls, wants to raise salaries and pensions, halt layoffs and freeze the privatisation of state assets — key elements of reforms demanded by Greece's EU-IMF creditors.

Schäuble in his statement said that Germany had "great respect" for the reforms Greece has implemented since 2009 and insisted Berlin would continue to "support Greece on its path of reforming so as to help itself".

But he added: "If Greece chooses another path, it will be difficult."

"Every new government must respect the agreements made by its predecessors," he said.

Earlier a spokeswoman for Chancellor Angela Merkel declined to comment on what she called "domestic political developments" in Greece. "We will have to analyse them and then decide on an approach," the spokeswoman told reporters.

Meanwhile in Frankfurt, the European Central Bank said Monday it would seek views from Greek authorities on how to proceed with a review of the country's bailout in the wake of the news.

"It's now for the Greek electorate to decide about the future composition
of the parliament and the government. We will not interfere in or comment on
this democratic process," the ECB said in a statement.

The European Union and the International Monetary Fund have overseen two massive international bailouts for Greece after its debt crisis nearly destroyed the single currency zone.

But even after the rescue packages worth €240 billion and most of the debt held by private investors being wiped out, the economy has only just begun to recover after six years of contraction.

The reforms required by the creditors have improved the government's finances but have taken a heavy toll on Greeks as unemployment has soared above 27 percent and many people have had wages and benefits cut.

Greece recently secured a two-month extension from its EU-IMF creditors to conclude an ongoing fiscal audit that will determine the release of some 7.0 billion euros in loans. The extension expires in February.