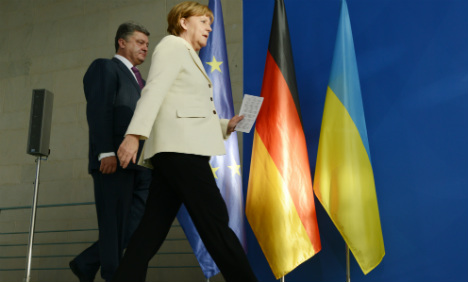 Merkel had late on Saturday discussed the Ukraine crisis in phone calls with the country's President Petro Poroshenko as well as with Kazakh President Nursultan Nazarbayev, her spokeswoman said in a statement.

"The chancellor welcomed the exchange of prisoners between the Ukrainian government and the separatists," in which almost 150 government troops and more than 220 insurgents were freed, said the statement.

Ukraine's allies in Europe hope the exchange will propel peace talks held in Minsk, to reinforce a largely ignored peace plan struck in September. But a final round of negotiations Friday, which was meant to lead to a comprehensive truce deal, has been indefinitely postponed.

Merkel "expressed regret that the scheduled meeting of the Contact Group including all signatories to the Minsk Agreement did not take place," said the statement, adding that the situation could only stabilise if the agreed lines of communication are implemented.

Merkel "appealed to the Russian government to use its influence on the separatists to this this end," added the Berlin statement.