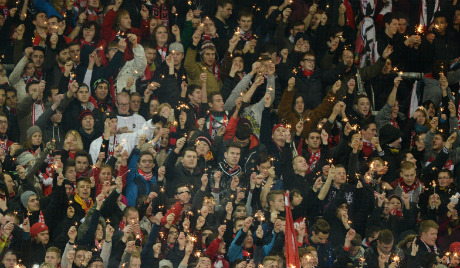 Germans football fans will have nothing to watch this Boxing Day Photo: DPA

In the UK the boxing day game is as much a part of Christmas as mince pies, the Turkey, the Queen's Speech and – usually – a crashing hangover and the belt being loosened a notch or two.

In Germany, by contrast, it is unheard of. Despite Germans' image as industrious and hard-working, the stars of the Bundesliga (and, indeed, the lower divisions) take a six week breather from mid-December until the end of January.

Which enables the players to spend Christmas with their loved ones, and go on a New Year's Eve bender (within reason, of course, for professional athletes), before jetting off to the Mediterranean, or increasingly, the Gulf States, for a training camp in the sun.

The Local spoke to British football fan Mark Wilson, who runs an expat group of supporters of the second division Berlin team FC Union, on what a great family tradition the Germans are missing out on.

"To be fair, the primary reason is the weather. The football authorities were worried about multiple cancellations pushing back the season with too many postponed matches.

"But as it happens, in the last couple of seasons there have been times when games have been postponed all the way through February and March anyway, as the German winters do tend to go on a bit – and be severe.

"And at FC Union, at least, we have undersoil heating at the pitch, so it wouldn't be a problem to continue playing.

"What I think the Germans miss out on is something kids in Britain have been brought up on for years. Especially when you support a working-class side, it's something embedded in the community.

"Especially at Christmas, it's a family time, when people return home, everyone goes back and there's a huge sense of coming together. You often get big match-day attendances. A chance to catch up with friends as well as watch the match.

"The Boxing Day game is simply part of the fabric of Christmas. I think the Germans would lap it up, to be honest.

"On the other hand, the New Year's Day game – I hate it. The problem in the UK is there's simply not a sufficient public transport system. No trains, no buses.

"And, speaking personally, simply getting out of bed on New Year's Day can be quite hard work…if you know what I mean."

In Britain, the Boxing Day game tradition dates back to 154 years, to a day in Sheffield when the two local teams – Sheffield FC and Hallam FC – played a local derby.

When the Football League's inaugural season came around in 188-89, a precedent had been set, although a similar tradition of playing games on Christmas Day itself petered out in the 1960s.

Recently, there's been a pressure in English football to copy the German model, and give players a winter break in order to recuperate and avoid injuries.

"The fans who pay money on the turnstiles just want to see some football, see their local team, they don't care so much about the England squad.

"The Boxing Day game is a time to clear the pipes, get some fresh air. Football is supposed to be fun, it's part of the entertainment industry. After all, the players are nothing more than paid performers.

"And, to be honest, there's bugger all else to do on Boxing Day in Britain."