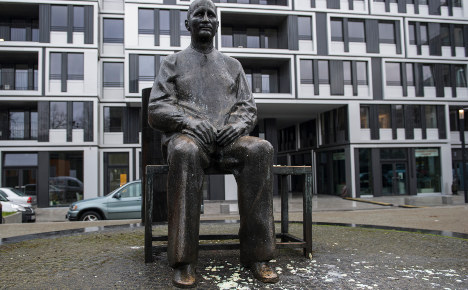 Police said that detectives were looking into the case after a note claiming responsibility for the vandalism against the treasured playwright was found, Tagesspiegel reported.

Their name appears to be a pun on the abbreviation Pegida, used by demonstrators in Dresden protesting against the “Islamization” of Europe.

The anti-investment activists' display is reminiscent of one in January 2013, when a Prenzlauer Berg statue of sculptor Käthe Kollwitz – creator of many famous war memorial figures – was brutalized with a plateful of specialty Swabian spätzle.

That action was claimed by Swabian “separatists”, who were joking about Kollwitzplatz being the centre of the so-called “Swabylon” area of the capital's yuppie district.

Just a few months later in May, Swabian philosopher Hegel's statue was attacked with archetypal Berlin Currywurst by a group calling itself “denaturalize Swabians”.

A low point in the japes came when graffiti reading “Don't buy from the Swabian” was sprayed on a wall in Prenzlauer Berg, recalling the Nazi period when such injunctions directed against Jews were taken seriously.

As for Brecht's statue, it quickly recovered from its ordeal, with rain washing away most of the salad over the course of the morning.