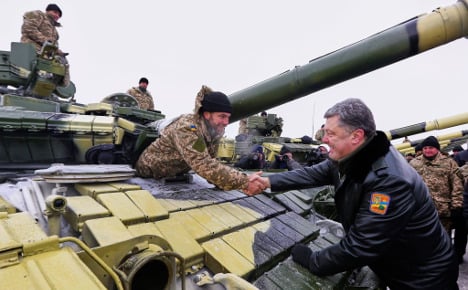 Chancellor Angela Merkel, President Francois Hollande and President Vladimir Putin agreed on the new negotiations by the Ukraine Contact Group during a telephone conference on Monday.

“The partners were agreed that the implementation of the Minsk Agreement must be urgently advanced and discussed concrete suggestions for solutions, in particular relating to prisoner exchange”, the German government said in a statement.

Contact Group members include Russia, Ukraine and the Organization for Security and Co-operation in Europe (OSCE).

Peace talks have been repeatedly delayed as the parties squabbled over timing and the agenda.

Foreign Minister Frank-Walter Steinmeier was unable to come up with a meeting time and place for the Contact Group in a negotiating push last week.

Ukrainian separatists under leader Denis Puschilin were demanding that as well as prisoner exchange, the talks include maintaining the ceasefire, the withdrawal of artillery and other military equipment, and an end to the Ukrainian government's blockade of the separatist-controlled Donbass region.

An agreement remains a distant prospect as Ukrainian leaders continue to look to the West rather than Russia, with Moscow fearing a threat to its security if Ukraine joins Nato.

MPs in Kiev will vote on Tuesday on whether the “bloc-free” status the country has held since the fall of the Soviet Union should be maintained.