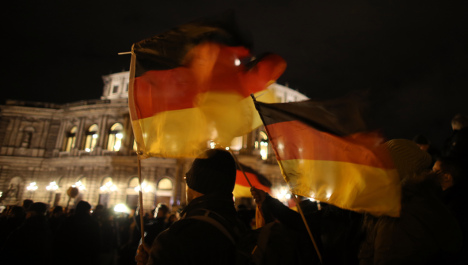 However, the figure was well down on the 30,000 that organisers of the Pegida (Patriotic Europeans Against the Islamification of the West) had hoped to reach in a Facebook posting late Monday.

It also represents a slight slowing in the growth of the group, who in the past two weeks had gone from 10,000 to 15,000 demonstrators.

The protestors sang Christmas carols outside the city's opera house – in a move condemned by the local bishop as "exploiting a Christian symbol and a Christian tradition" for political purposes.

Meanwhile, in Munich, a counter-demonstration in support of immigrant and Muslim rights drew 12,000 supporters on Monday night.

Germany has been rocked by the sudden outburst of anti-Muslim and anti-Islam fever in Dresden, where the protests started three months ago – initially with only a few hundred.

Appropriating the symbolism of the peaceful revolution that overthrew the communist regime in East Germany 25 years ago, the group march on Monday nights and use the slogan "Wir Sind die Volk" (We Are The People).

They also largely refuse to speak to the media, calling newspapers and TV "press liars." About 4,500 counter-demonstrators marched through city under the slogan "Dresden Nazi-free", warning that there was no space for racism and xenophobia in the country that perpetrated the Holocaust.

Braving cold and wet weather, the Pegida demonstrators gathered outside the historic Semperoper concert hall for their pre-Christmas recital. Police put their numbers at about 17,500, up from the previous high of 15,000 a week earlier.

The management of the opera house signalled its distaste by turning the building's lights off and flying flags outside that read: "Open your eyes", "Open your hearts", "Open doors" and "Human dignity is sacrosanct", the first line of the national constitution.

The rallies have been condemned by most politicians, including Chancellor Angela Merkel, who warned last week against "agitation and mud-slinging" against foreigners and Muslims. It is estimated that only 0.1 percent of Dresden's population is actually Muslim.

And former German chancellor Gerhard Schroeder, of the centre-left Social Democrats, called for concerned citizens to launch a "rebellion of the decent" against the anti-foreigner movement, saying "that's the kind of public reaction we need now".

Pegida, born in a city that was part of communist East Germany until the fall of the Berlin Wall 25 years ago, has spawned copycat groups in western areas which have failed so far to attract similar crowds.

Smaller offshoot groups rallied on Monday in the western cities of Bonn, Kassel and Würzburg, but they only drew up to 200 followers each and were all vastly outnumbered by counter-demonstrations that drew 20,000 nationwide.