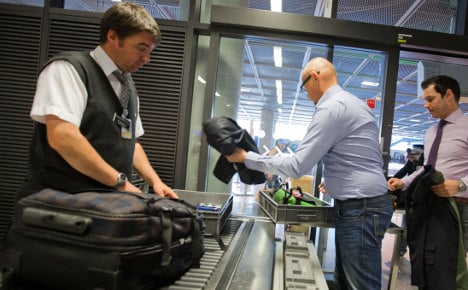 Bild am Sonntag unveiled details from the leaked report, which found that poorly trained personnel provided by a security contractor at Germany's biggest airport were to blame.

Staff manning the X-ray machines didn't know how to read the images of the hand baggage passing their stations and missed the forbidden items, the report said.

Contacted by dpa, a European Commission spokesman in Brussels would only confirm that there were regular security checks at European airports, but wouldn't comment on any particular result.

He added that if the inspectors found security controls wanting, the country concerned had to quickly set the problems right.

The consequences for Frankfurt passengers if security measures are not brought up to scratch could be frustrating.

If staff don't shape up, it could eventually be classified as a “non-Schengen airport” (referring to the European passport-free travel zone).

That would mean passengers having to go through an additional security check on arrival at another European airport.

A spokesman for Frankfurt Airport confirmed to dpa that Frankfurt had been ordered to improve its security and would retrain 2,500 workers.

And he said that federal police carried out unannounced “real tests” several times a month to check security procedures.