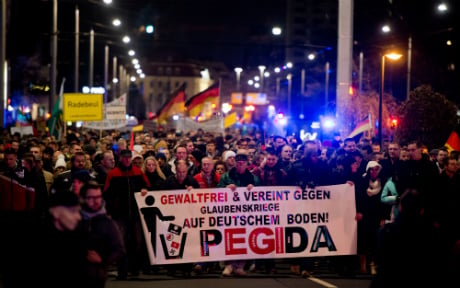 Last week's Pegida protest in Dresden, which drew a crowd of 15,000 Photo: DPA

RTL sent a reporter undercover to last week's protest, as the group refuse to speak to what they call the "media liars."

However, he was picked out of the crowd and interviewed by the national Panorama programme.

Instead of identifying himself – presumably for fear of the reactions of the rest of the crowd – he said on camera: "When you go out, there really are a lot of Turks. I get on with many of them fine, but it comes to the point where you think 'Are we really still German in Germany?"

It was only when the programme was broadcast on December 18th that former colleagues recognised the reporter.

Thomas Präkelt, head of RTL's eastern bureau, said the man had been fired. "Our employee made a mistake which is inexcusable, " he told Frankfurter Allgemeine Zeitung.

"Our whole profession has been damaged."

It remains to be seen whether Monday night's turnout will continue the spectacular growth in the movement, which went from a few hundred at the start of October to 15,000 last week.

In a deliberately provocative piece of symbolism, the group chose Mondays to echo the famous Monday night demonstrations in nearby Leipzig, which helped toppled the communist regime in 1989, and march under the slogan "Wir Sind das Volk" (We Are The People) from that era.

Tonight's Pegida march is scheduled for 1830 at the theatre square in Dresden and advertises itself on Facebook as "Christmas with Pegida", offering Christmas Carol singing during the march.

Several other counter-demonstrations are planned, both in Dresden, and Munich, Kassel and other cities, while the Bishop of Saxony, Jochen Bohl, will offer prayers of peace in Dresden's Church of the Cross.

Meanwhile on Monday, the Federal Office for Migration revealed that the number of asylum seekers coming to Germany may rise next year.

"So far next year we expect 200,000 first-time applications, plus 30,000 follow-up applications," Manfred Schmidt, President of the Federal Office for Migration told dpa.

But he promised that an increase in reception facilities, combined with 350 extra new staff, should prevent some of the problems Germany has seen this year, such as the impromptu camps and squats in the centre of Berlin and Munich.

A series of high-profile politicians laid into the issue on Monday, ahead of the Pegida protest.

Former chancellor Gerhard Schröder called on more citizens to join the counter-protests. Calling for a "revolt of the decent", Schröder said "In Berlin we already had some 200,000 people marching against xenophobia and antisemtism ,and, of course, among those marchers were the president and the chancellor. Such a public demonstration we also need now."

Die Linke (Left party) state president Bodo Ramelow, who leads neighbouring Thuringia, said simply: "We have nothing to say to these racists in pinstripes."