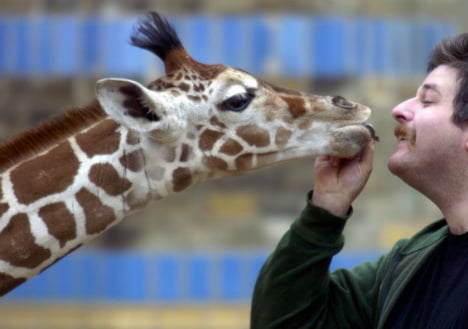 Kibaya the giraffe was on her way to a morning feed on Friday when she stumbled and fell.

Vets found the 11-year old had torn a leg muscle.  “It’s like with horses, such serious leg injuries are very hard to treat,” vet Guenther Strauss told the Berliner Morgenpost.

“With a giraffe, we unfortunately can't just put a plaster on it.”

Last year Kibaya gave birth to a male baby giraffe – the first born in the zoo in four years. He arrived at a whopping 1.85m and 100kg – big, even by newborn giraffe standards.

“This tragic accident, just before Christmas, was especially shocking for her keepers,” said Strauss. That's the same institute that performed the autopsy on Knut the Polar Bear, probably the zoo’s most popular star of all time.

Knut was found drowned in a pool in March 2011,  leading to crowds of mourners gathering outside the gates of the popular tourist attraction. The Liebniz institute concluded Knut died of an inflammation of the brain.

Born in captivity – the first such success in 30 years, but rejected by his mother, Knut was nutured by Zoo keepers. His cute looks made him such a mega-star the zoo was reported to have increased ticket sales by 30 per cent.

Berlin Zoological Garden, to give it its full name, opened in 1844 and is the most popular in Europe, attracting 3 million visitors a year.The German capital also boasts a second zoo,  in the former east of the city.