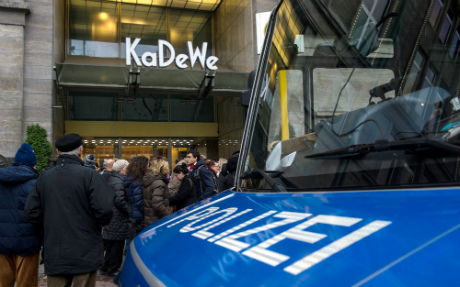 The aftermath of the raid at Berlin's luxury department store Photo: DPA

Berlin's Kaufhaus des Westens (KDW, Western Department Store), the equivalent of Harrods, was shut down by armed police in the wake of the raid on Saturday.

Four masked men stormed into the shop an hour after it opened, where 180,000 shoppers were expected to stock up on Christmas presents over the course of the day.

The men made straight for the Chopard jewellery boutique, sprayed a security guard in the face with tear gas, and broke into display cabinets with hammers.

They made off with Rolex watches and other high-end jewellery, before disappearing into a waiting black Audi getaway car.

Although the value of their haul was not immediately made known by KDW, press reports put it at upwards of €100,000 – for five minutes' work.

The shop was closed down for an hour after the raid, as shocked shoppers who witnessed the raid hugged and comforted each other.

Police chief Jörg Radek said Monday they were looking for a highly-professional gang.

Radek told RBB radio: "The thieves came in broad daylight, they were professional and well-organised."

It was likely the gang had already cased out entrances and exits, and scoped streets for the best location for the getaway car, deputy national police chairman Radek added.

A spokeswoman for the store told BZ newspaper: "Our security system took effect very quickly. We are prepared for every situation."