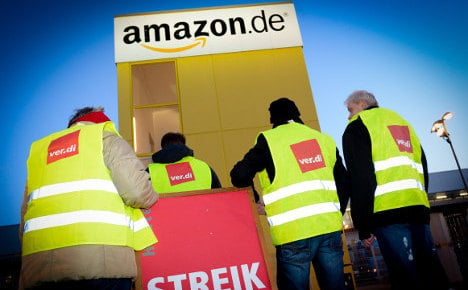 Members of the Verdi union have been on strike since December 15th, demanding to be treated as retail rather than logistics workers, meaning they would receive better pay and conditions.

They plan to maintain the strike  at six of Amazon's nine distribution centres across Germany until 3 pm on Christmas Eve.

“Customers are making a safe bet with Amazon for their Christmas presents”, the company said in a statement.

“Only a minority of workers are taking part in the strikes.”

They added that order deadlines had been extended to midday on Monday for deliveries by Christmas Eve.

“Amazon calls itself the biggest online retailer in the world, but simultaneously refuses to recognise the distance retail labour contract”, Verdi chairman Frank Bsirske said on Friday in a message to workers.

“If you're advertising yourself as a distance retailer, you should live up to it”, he added.

French workers belonging to union CGT announced on Monday that they too would be walking off warehouse floors as they sought to increase the pressure for higher pay.

Amazon has previously said that its Europe-wide logistics network would allow it to work around the effects of Christmastime strikes in Germany.