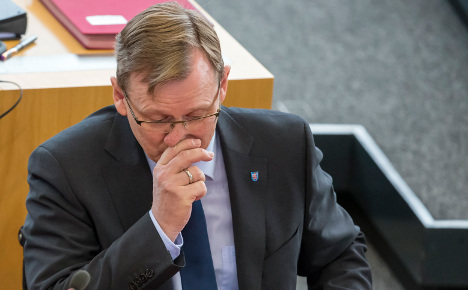 Bodo Ramelow looking low on energy at a sitting of the Thuringia state parliament. Photo: DPA

Ramelow, confirmed on December 5th as the first state leader from the far-left party with roots in the East German Socialist Unity Party (SED) is spending five days in Venice with his Italian wife as well as family and friends, a state government spokeswoman in Erfurt said.

As minister-president, Ramelow is supposed to lead his state's delegation to the Bundesrat, Germany's upper house which represents the federal states (Länder) in Berlin lawmaking.

The state government spokeswoman said that Ramelow was recovering from several arduous months during his election campaign and coalition negotiations with partners the Greens and Social Democratic Party (SPD).

She added that he had promised his family and friends some time off after his nomination as minister-president.

An intense debated erupted on social media and among politicians after the news was reported by the Thüringische Landeszeitung (TLZ).

"Given his stressful work as a politician, health and family have an important place", SPD ally Wolfgang Tiefensee told the TLZ. "We should always respect it when someone takes the time they need for that."

"Lots of associations and organizations are waiting to find out about the grants that will let them continue their work in 2015", CDU state spokesman Annette Lehmann said.

Ramelow himself tweeted ironically that he'd “submerged in Venice”, including pictures of a diving team in one of the Italian canal city's waterways.