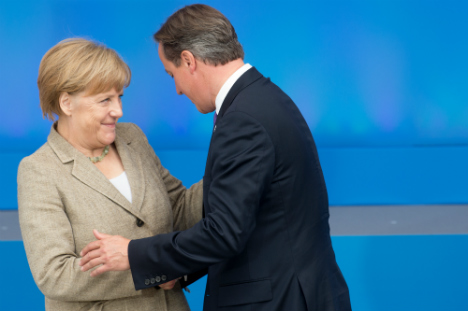 So near...and yet so far Photo: DPA

It was the year of Germany and, above all, Angela Merkel for the UK in Europe in 2014. The German chancellor wooed and won over the British political class in February with a speech, half in English, half auf Deutsch, to both Houses of Parliament. It held a warm message of support: "We need a strong United Kingdom with a strong voice inside the EU. If we have that we will be able to make the necessary changes for the benefit of all."

But there was already a caveat or, rather, several caveats as she referred to herself, jokingly, as “caught between the devil and the deep blue sea” regarding UK membership of the EU – and David Cameron’s renegotiation/reform agenda. And, lo, nine months later, she warned the PM he was reaching “the point of no return” – and the UK could quit after more than four decades of membership. Merkel set out her own red line in early November: no messing with the principle of free movement of labour.

And Cameron – knowing his pledge to cap net migration had been nullified with the rate running at 260,000 a year, mainly from outside the EU – responded in kind a few weeks later when he detailed his proposed changes to the modalities (no right to in-work benefits for four years, eviction from UK shores if jobless after six months, but no cap, a belated concession to Angie). For the first time he hinted at #brexit too: “If our concerns fall on deaf ears and we cannot put our relationship with the EU on a better footing, then of course I rule nothing out.” What happened in those nine months was, of course, the (only apparently) irresistible rise of Nigel Farage and his purple hordes. UKIP in late May won the European Parliament elections in the UK with 26.6 percent of the (shrunken) vote to Labour’s 24.4 percent, with the Tories trailing behind at 23.1 percent and losing seven seats – and then losing two Commons seats to the Kippers in later by-elections. UKIP cannot manage its way out of a paper bag but it breathes fear and loathing into CCHQ/Downing Street as polls show it might attract 1 million of the Conservative voters from 2010 – and half as many from Labour. It even won an MEP seat in Scotland, the UK’s most consistently pro-EU electorate.

Along the way, Cameron, Merkel’s special guest at her Berlin Schloss in April 2013, just weeks after his reformist pro-EU speech at Bloomberg, had lost the German chancellor. He badly mishandled the selection of Jean-Claude Juncker at European Commission president in June, with Merkel hanging him out to dry. (And then compounded it by refusing any criticism of the ex-Luxembourg premier over the Grand Duchy’s promotion of corporate tax avoidance). The “lonely and reluctant hegemon” (Martin Wolf) will no longer serve as Cameron’s protector as he pursues a reform agenda she now views as entirely selfish. She can be quite ruthless: look at the way she disposed of Helmut Kohl and has now dumped Nicolas Sarkozy. Sir John Major’s recent “wachet auf” call to Germany in Berlin that there is “a just under almost 50 per cent chance” of #brexit has fallen on deaf ears.

Under Cameron the UK’s policy towards the EU has drifted aimlessly apart from the “stop UKIP” stance. Rather than draw upon its “natural allies” (Peter Mandelson) in Germany, Holland, the Nordics, for its sorely-needed reform agenda and working with them and others to secure Europe’s future as a competitive, innovative economy, Britain risks further isolation. The half-hearted defence of the European Arrest Warrant, the opposition (now abandoned) to the cap on bankers’ bonuses, the phantom victory over the extra £1.7bn budgetary contribution – all this has served to undermine the UK as a team-player and suggest it is playing a different game to different rules. It’s hardly surprising, then, that Washington’s first port of call in the EU is Berlin and its second Paris – even under the hapless President Hollande.

This year of bluff and bluster has seen one prominent Tory ex-cabinet minister (Owen Paterson) propose serving a 2-year notice to quit and a current one (Philip Hammond) talk of being ready “to stand up from the table and walk away”. Both are virtually as Eurosceptic as Farage who has threatened to become the stridently dominant voice of Middle England. Voters are confused; in October Ipsos MORI found the highest pro-EU support for 23 years (56 percent v 38 percent); a month later YouGov found the reverse (38 percent to 43 percent in favour of quitting). But business is increasingly clear and so are Labour, the Lib Dems, SNP and Greens that membership of a reformed EU is a vital UK interest.

The battle lines over Europe for May 7 2015 are becoming a little clearer; the outcome ever more blurred. Merkel won’t be distracted by this as she turns to her goose and potato dumplings this Christmas.

By David Gow, Europe Correspondent for British Influence, the lobby group to keep the UK in a reformed EU.