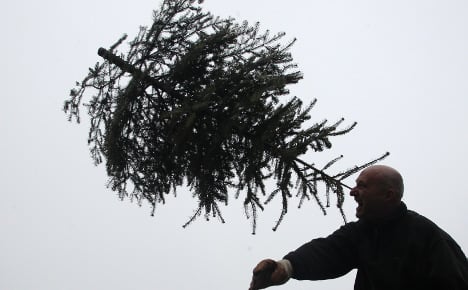 The charity said that they had asked an independent laboratory to test needles from 15 different trees bought in garden centres and hardware shops for some 150 pesticides.

Eight of the trees also contained one or both of the herbicides Glyphosate or Prosulfocarb.

He added that Glyphosate may be a carcinogen with harmful effects on embryonic development in humans, while Prosulfocarb is dangerous to the human nervous system.

“The manufacturers say that these substances can have long-lasting harmful effects in bodies of water”, he added.

The test was a follow-up to a first study by BUND in 2011, which found traces of pesticides and insecticides which are banned in Christmas tree nurseries.

While those chemicals were no longer present in the samples tested this year, BUND said that the current tests show herbicides were still being used by producers.

“These weedkillers are unnecessary for growing Christmas trees”, Brückmann said. “Because of the risks for the environment and for human health, producers have to stop using pesticides.”

BUND recommends that before buying a Christmas tree, customers ask whether it was grown in the region and whether it came from an environmentally-friendly nursery – although many salesmen they asked couldn't give satisfactory answers.