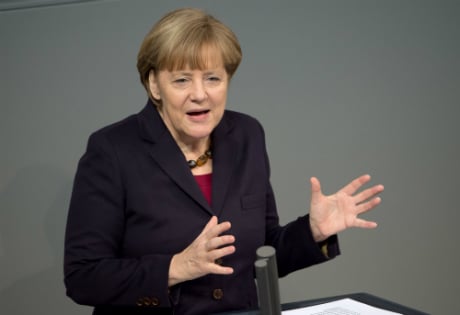 She was speaking after the rouble hit an all-time low this week, due to both Western sanctions and the plummeting oil price.

Merkel will today join other European leaders at summit in Brussels that will look at the standoff with economically-battered Russia over the fate of its Soviet-era satellite.

"The goal of our actions is and will remain a sovereign and territorially intact Ukraine that can decide its own future," said Merkel, cautioning that this would require continued "patience and perseverance".

She pointed to the humanitarian situation amid icy winter temperatures and said "Ukraine must be permitted to bring their own relief supplies safely to areas in the east of the country that are controlled by the separatists".

Meanwhile at his annual press conference in Moscow on Thursday President Vladimir Putin claimed that any Russian soldiers fighting on the side of the eastern separatists were merely "following the call of their hearts."

But he did admit the current economic crisis could last two years, whilst insisting actions by the Russian Central Bank would "keep the situation on track."

Putin said Russia still had 340 billion euros in currency reserves, although indicated his country should lessen its dependence on oil reserves, admitting "anything else will not work."

Merkel reiterated that there is "no military solution" and pledged to continue political and economic support for Ukraine, which in turn should "modernise the economy, strengthen the rule of law and fight corruption".

She stressed that Europe continued to seek dialogue with Moscow, and that the goal is "European security cooperation with Russia, not against Russia".

"Until we reach that goal… sanctions remain unavoidable," she said.

Merkel, who grew up under communism in the former East Germany whilst Putin was serving as a KGB officer in Dresden, said that "the end of the Cold War 25 years ago allowed the countries of central and eastern Europe to determine their own paths.

"If we allowed this self-determination to be abandoned today, it would mean nothing less than a new division of Europe into spheres of influence, a new splitting of Europe.