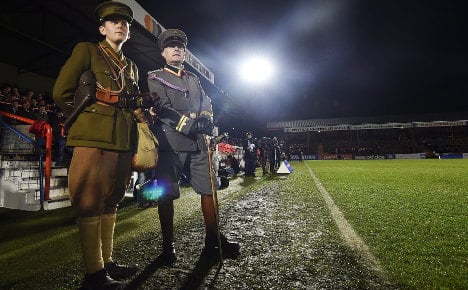 “We can hardly imagine now how they must have felt then”, German team captain Master Sergeant Stefan Wagner said.

“This game today is important, because it's an opportunity for people to think about the events”, British General Nicholas Carter said.

The teams met on the grounds of League Five team Aldershot Town FC in front of around 2,500 spectators.

100 years ago the “Christmas Miracle” brought together soldiers from opposing trenches in Flanders, Belgium, to exchange food and drink, share cigars and play the famous game of football – with steel helmets for goalposts.

On Wednesday, a singer also performed “Silent Night” (“Stille Nacht” in German) – one of the Christmas songs the soldiers sang together in the shell-cratered No Man's Land between the front lines.

Now the truce is commemorated in the French border town of Frelinghien with a permanent memorial.

On Christmas morning 1914, soldiers held up signs above the ramparts wishing one another a “Happy Christmas” before cautiously emerging from their trenches.

The truce gradually spread across 700 kilometres of the front lines, although in some places there was no halt to the fighting.

But it was not to last, as after two days the soldiers returned to their positions and resumed the grinding warfare that was to claim the lives of millions over almost four more years.

Military authorities on both sides suppressed details of the truce, as they feared that a repeat performance might undermine morale.

A letter recently discovered and seen by The Times from British General Walter Congreve to his wife revealed that the renewal of the fighting was already on soldiers' minds during the ceasefire.

He wrote that one of his men “had smoked a cigar with the best shot in the German army, then not more than 18” and noted his position, hoping to “down him tomorrow”.

He adds that “next door the two battalions opposite each other were shooting away all day.”

“I was invited to go and see the Germans myself but refrained, as I thought they might not be able to resist a General.”

On the football field in Aldershot on Wednesday, the thought of their predecessors was never far from the two teams' minds.

“Chills ran down my back” during the minute of silence, British forward Callum Wilkinson said, while German goalkeeper Andreas Forster said “I had real goosebumps”.

Wilkinson and Forster came face-to-face in the third minute, with the British striker scoring the only goal of the match.

But the Germans were far from being sore losers, and the two teams were quickly on their way to “eat together and have one or two beers”, Forster said.

In Berlin, the British Council commemorated the event with their own football match on the rooftops.

@TheLocalGermany See how we commemorated the event with a football match above the roofs of Berlin #FootballRemembers pic.twitter.com/tWsURraaJA