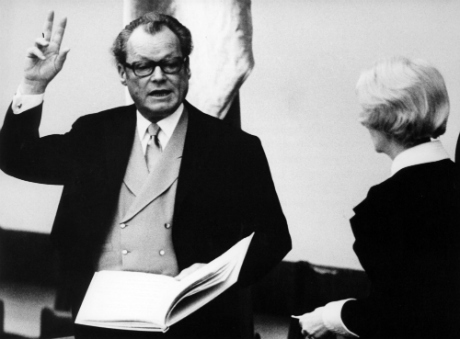 Willy Brandt being sworn into office in 1972 Photo: DPA

Born Herbert Frahm in Lübeck on December 18th, 1913, former chancellor Willy Brandt’s name is carried by streets and squares across Germany (and even now its troubled Berlin-Brandenburg BER airport). But few people know about the statesman’s near spy novel early years – or his kaleidoscopic series of identities.

Humble origins indeed: The son of a single mother who worked as a store cashier, the future West German chancellor went on to lead a war-time life packed with the exploits of storybook legend.

A member of the Social Democratic Party (SDP) from 1930, he fled Germany for Norway in 1933 to escape Nazi persecution. It was then that he took the pseudonym Willy Brandt to avoid detection by Nazi agents, formally adopting the name in 1948.

At least two more aliases came first though. In 1936, Brandt travelled to Germany in the guise of a Norwegian student named Gunnar Gaasland to set up the Socialist Workers Party underground group in Berlin.

He also used the name Felix Franke to agitate for anti-Nazi resistance in Norway’s press, as well as dispatch messages to allies in France via a drop-box address in Paris that the Gestapo eventually shut down.

Working as a journalist for left-wing publications, Brandt then travelled to report on the Civil War in Spain in 1937. The German government revoked his citizenship the next year.

In 1940, Brandt was arrested in Norway by occupying German forces, but was not identified as he wore a Norwegian uniform. On his release, he escaped to neutral Sweden where he lived as a Norwegian citizen until the end of the war, becoming fluent in both Nordic languages.

In 1946, Brandt returned to Berlin, restored his German citizenship and joined the Social Democratic Party two years later, when he finally adopted his nom de guerre.

He went on to serve as SDP leader, Mayor of Berlin, and West German Chancellor from 1969 to 1974.

Brandt cemented his place in the history books as a peacemaker with his ‘Kniefall von Warschau’ (Warsaw genuflection) on December 7th, 1970, when he went down on one knee in honour of the victims of crimes committed by the Germans in the former Jewish ghetto.

In 1971, he received the Nobel Peace Prize for his work in improving relations with East Germany, Poland, and the USSR, although his Neue Ostpolitik triggered a backlash among more conservative West Germans.

One – possibly apocryphal – story from this time relates that media advisors told the then chancellor he was too workaholic and needed a more relaxed public image. Hence he let slip to one interviewer that he enjoyed an occasional round of golf to relax. Cue dozens of sets of golf clubs as gifts from visiting dignatories. They all ended up, unused, in the basement of the official residence in Bonn.

Brandt resigned as Chancellor in 1974, after one of his closest aides, Günter Guillaume, was exposed as an agent of the Stasi, the East German secret service.

But he remained a champion of German reunification, coining the figure of speech: 'What belongs together is now growing together.'

Regarded by many as a 'patriarch' of social democracy in Germany, he may have wondered at his name being bestowed on the reunified capital’s new airport, which is now years behind schedule and mired in mismanagement and overspending scandals.

What too would he have made of plans to erect a statue of him at the site at a reported cost of half a million euros?

Nonethless, the struggling project stands by its decision to name itself after the statesman.

“During his lifetime, he travelled to more than 80 countries on all continents and was at home at airports,” reads the rather flat introduction to Brandt's life's history on the BER website.