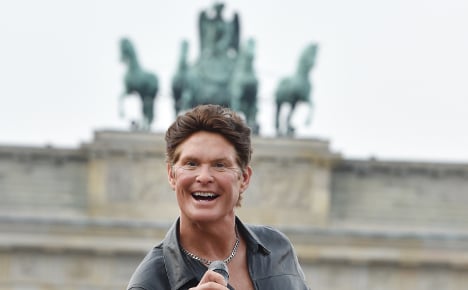 A wax figure of Hasselhoff in front of the Brandenburg Gate in Berlin. Photo: DPA

The Baywatch and Knightrider star will be the star attraction at a five-hour concert, coming on at just after midnight to serenade revellers seeing in 2015 in one of Europe's biggest open-air parties.

Hasselhoff – still a major star in Germany – is fondly remembered for his now legendary performance in front of half a million people of his song "Looking for Freedom" at the Berlin landmark on December 31, 1989 – just weeks after the fall of the Wall.

Last year he flew back to Berlin to – ironically – demand that part of the Wall remain standing, after developers threatened to demolish one of the few parts of the structure still remaining at the East Side Gallery.

Performing at the Brandenburg Gate even gives The Hoff – as he is known by fans – kudos over US President Barack Obama, who was denied permission to speak in front of the iconic structure by Chancellor Angela Merkel when campaigning for office, and had to settle for the nearby Victory Column in the Tiergarten instead.

November saw Germany celebrate the 25th anniversary of the fall of the Wall, with a string of illuminated balloons marking parts of the course of the wall which divided East and West Germany – including in front of the Brandenburg gate.

Other stars on the night will include Katherine Jenkins, Jimmy Sommerville and David Garrett, with entry free.

But it was unclear if new Berlin mayor Michael Müller would follow in the footsteps of his party-loving predecessor Klaus Wowereit and attend.

Organiser Willy Kausch told the BZ newspaper he had been invited but "no, we haven't heard from him yet.'