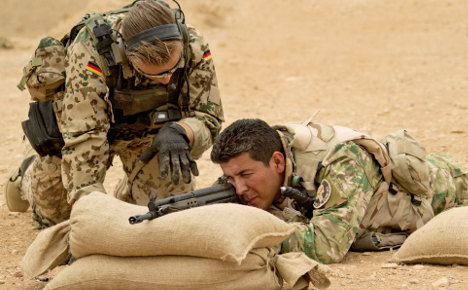 "This is not a fighting job, they will be providing training," Steinmeier said. "We've made sure that the decision can be withdrawn at any time if the security situation changes."

The move to send armed soldiers to train the Kurds is legally controversial, as it will not take place as part of larger United Nations or Nato mission – traditionally the only deployments acceptable under the German constitution.

Around 60 countries have joined a loose coalition to fight the Islamic fundamentalist group which has captured territory across much of Iraq and Syria.

But German opponents of further intervention, including politicians from the Left (Linke) party say that that doesn't constitute the “system of mutual collective security” which the constitution calls for as a framework for military action.

“The federal government can't point either to a UN resolution or to one from Nato, there is no security system, nothing at all” said Left chief Greogr Gysi, adding that he would take the case to the Constitutional Court.

Germany has already sent €70 million worth of weapons to Kurds in northern Iraq, who have been fighting Isis for months.

No German aircraft have taken part in the recent airstrikes against Isis.

The Cabinet decision came on the same day that the Süddeutsche Zeitung (SZ) reported on the death of a prominent German Islamist who had become a leading figure in the Isis organization.

Egyptian-German Reda Seyam, who lived for several years in Berlin, had recently become education minister for the terrorist group in the occupied city of Mosul in northern Iraq.

Seyam, who had previously said that it was his “duty” to “kill unbelievers”, was responsible for a ban on music, art, philosophy and Christian theology in Mosul's schools and universities.

The trained mathematician had been fighting his own holy war for 20 years, with German security services saying that he travelled to Bosnia in 1994, using a cover as a charity worker to bring money and weapons to Muslims fighting Serbs.

His first wife, writing under a pseudonym about their marriage, said that Seyam had met Ramzi Binalshibh, one of the planners of the September 11, 2001 attacks, while in the Balkans.

Seyam was also a suspect in the 2002 Bali bombing in Indonesia, but was never convicted of anything worse than overstaying his visa.

While living in Berlin he named one of the sons he had with his second wife “Djehad”, fighting through the courts to have the name allowed.

SZ also reported that Seyam was in contact with Dennis Cuspert, a former rapper known as Deso Dogg who converted to fundamentalist Islam and travelled to Syria to fight for Isis.