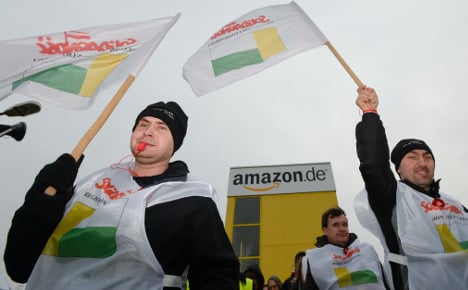 Workers at the Amazon distribution centre in Leipzig. Photo: DPA

“We'll keep up and extend the pressure. The strikes will hit Amazon's Christmas sales – even if the company is desperately trying to give the impression that everything's fine”, Verdi spokeswoman Eva Völpel said in Berlin.

Amazon said that around 1,100 of its 20,000-strong workforce nationwide had walked out as part of the action, which at a total duration of six days will be one of the longest in its history.

Company spokeswoman Annette Nachbar said that Amazon's Europe-wide network will be able to manage the impact of the strikes and prevent them impacting deliveries.

“I find it regrettable that Amazon's leadership haven't yet been prepared to negotiate”, Rheinland-Palatinate labour minister Sabine Bätzing-Lichtenthäler said.

Verdi is trying to force Amazon to come to the table and discuss a new pay and conditions deal with its members under the rules applying to retail workers.

They say that more than two-thirds of their colleagues are on limited-term contracts and complain of low pay and punishment for bad performance rather than rewards for going above and beyond.

But the US-based company argues that it is in the logistics business, not retail – and claims it pays workers at the higher end of the scale for that sector.