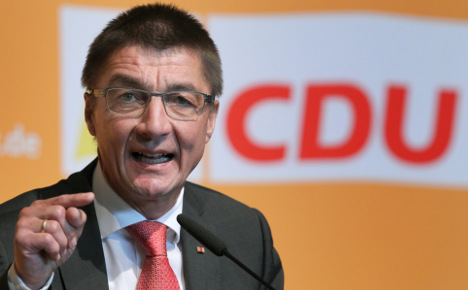 “We don't know the cause of his death”, a spokesman for the state prosecutor's office in Ravensburg told Reuters.

“To counter all doubts and speculation, including any related to his previous work, like his role as the government's coordinator for Russia, an autopsy was requested and approved by the court.”

It had initially been reported that the 57-year-old Christian Democratic Union (CDU) MP had died of heart failure.

Schockenhoff was coordinator of foreign policy towards Russia for the German government from 2006 until earlier this year.

He was a hawkish voice in the debate over how to deal with Putin and often clashed with his successor Gernot Erler of the Social Democratic Party (SPD).

Shockenhoff supported tougher sanctions against Russia following the annexation of Crimea in March and suggesting that UN peacekeepers be sent to Ukraine following the shooting down of Malaysia Airlines flight 370.

“Russia will only respond when pressure is applied”, Schockenhoff told Deutschlandfunk radio in November.

“Putin will only do what he's forced to do.”

Foreign Minister Frank-Walter Steinmeier said that he had “got to know and come to value him as a highly engaged foreign policy expert” on Sunday.

“The CDU/CSU fraction in parliament loses with him one of its best-known politicians, many of us also lose a good friend and close companion”, said CDU leader in the Bundestag Volker Kauder.

Schockenhoff was particularly respected for having admitted his alcohol problems to TV talk show host Günther Jauch after being caught driving under the influence in autumn 2011.