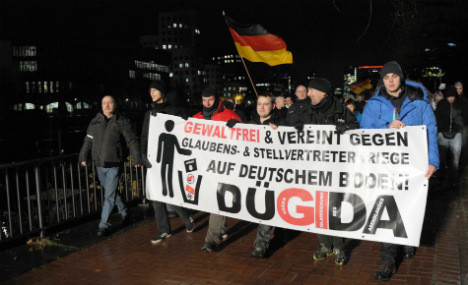 A weekly “Europeans Against Islamization of the Occident” (Pegida) march is expected to draw more participants than ever before on Monday night as politicians dither over how to deal with the growing movement.

"Of course there's freedom to demonstrate in Germany," Merkel said in Berlin on Monday. "But it's no place for agitation and mud-slinging against people who come to us from other countries.

"That's why everyone should watch out that they aren't being instrumentalized by the initiators of an event like this."

The march has grown in numbers from around 500 to 10,000 since October. Monday night's demonstration comes against the backdrop of the ongoing apparent Islamist hostage situation in Sydney, Australia, which is attracting global media attention.

Pegida organizers gave notice to the police of their plans for a follow-up to last week's 10,000-strong rally.

They will be met by counter-demonstrators from “Dresden for all”, who brought 9,000 onto the streets calling for more tolerance at the same time last Monday. Justice Minister Heiko Maas told the Süddeutsche Zeitung on Monday that the country was living through “a new level of escalation in agitation against migrants and refugees” and that Pegida was “a shame for Germany”.

He argued that the demonstrations drew a mixture of people who could still be convinced that immigrants were not a threat and others who “had a clear affinity for xenophobia”.

But he faces an uphill battle, as a survey published by Spiegel on Monday found that 65 percent of Germans said mainstream politicians weren't listening to the concerns of ordinary people about immigration and asylum.

And right-wing anti-Euro party Alternative For Germany (AfD) is stepping into the gap left by the Christian Democratic Union (CDU) and the Social Democratic Party (SPD).

“The vast majority of them are legitimate demands,” Lucke said.

Pegida's list includes demands for an “obligation to integrate” to be added to the constitution, fairer sharing of refugees among European countries, more police and “zero tolerance” for asylum seekers and migrants who commit crimes.

They call for “an immigration on the model of Switzerland, Australia, Canada or South Africa” and the maintenance of “Occidental culture with a judaeo-Christian character” in the face of the “parallel society” of Sharia courts and police they claim is being introduced by Muslim fundamentalists.

“Germany is not like this,” Muslim Central Council president Aiman Mazyek told broadcaster Bayern2 on Monday.

“The political class has failed to communicate with the citizens,” he said, arguing that people were projecting their fears for the future and for their jobs onto Muslim migrants and refugees.

At the weekend some 15,000 people demonstrated in Cologne in support of racial harmony, immigrants and asylum seekers.

The weekly Monday night demonstrations in Dresden hark back to the Monday demonstrations in Leipzig, East Germany in 1989, even down to the use of the slogan "We Are The People", which eventually lead to the collapse of the Berlin Wall – a symbolism that has outraged many ordinary Germans.

SEE ALSO: Government in a twist over pinstriped Nazis