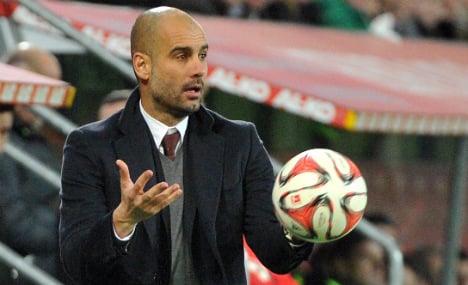 Photo:DPA
Due to Ukraine's ongoing conflict with Russia, Monday's draw means the first leg will be moved from Donetsk to Lviv, in the west of the war-torn country, on February 17, with the return leg at Munich's Allianz Arena on March 13.
Ukraine co-hosted the UEFA European Championship as recently as 2012, but the ongoing civil war has left large parts of the east of the country – including Donetsk – out of bounds.
The British Foreign Office warns against all travel to Russian-annexed Crimea, and Donetsk, and warns travellers to "be vigilant" in all other parts of Ukraine for safety and security risks.
It will be the first time 2013 Champions League finalists Bayern have played Mircea Lucescu's Donetsk, but Guardiola has prior knowledge of the Ukraine outfit from his four years as Barcelona coach.
Bayern reached the last 16 as group winners while Donetsk qualified as group runners up and their Brazilian striker Luiz Adriano is the competition's top scorer with nine goals in his five matches so far.
"Bayern have never played against Donetsk, but I have five times, four times in the Champions League and once in the Super Cup, and I even lost to them once," said Guardiola.
"Mircea Lucescu is one of the best coaches in Europe. They have many good Brazilians, young talented players who always like to attack.
"I am looking forward to the ties and I think it will be an excellent match as both teams like to attack.
"I have a lot of respect for the opponent."
Donetsk are five points behind leaders Dynamo Kiev in Ukraine's Premier League and last reached the last 16 in Europe in the 2012/13 season.
Most of Bayern's Germany stars have no experience of playing Ukrainian opposition, but Arena Lviv is where Germany beat Portugal and Denmark in the
group stages of Euro 2012, which goalkeeper Manuel Neuer takes to be a good omen.
"Donetsk are the least-known side in the last 16, so it won't be so easy to prepare for this game," said Neuer.
"The club from the Ukraine has a lot of money and they have invested very well in the team.
"I have personally never played against them, but I at least have some experience in the Lviv stadium with the Germany team when we beat Portugal 1-0
there at Euro 2012, so that's a good omen.
"Anyway, I am quite confident we'll reach the quarter-finals."
Bayern have played and beaten Arsenal at the last 16 stage in the Champions League for the last two seasons and Dutch winger Arjen Robben said it was a
relief to get a different team in Monday's draw.
"I think it's good to finally play someone different and not Arsenal again," joked Robben having scored twice in Bayern's 4-0 win at Augsburg on
Saturday which left Bayern nine points clear in the Bundesliga.
"But we need to be careful, a few Brazilians play there who are really good. We will analyse the opponent well and concentrate on the game."