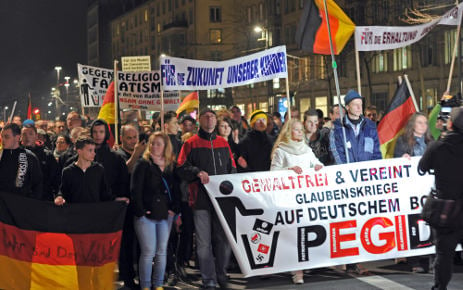 Pegida marchers on the move in Dresden in November. Photo: DPA
Starting in the east in October and spreading to other cities, the marches led by the group Pegida ("Patriotic Europeans against the Islamisation of the West") are having serious repercussions, with the far right misrepresenting its real agenda, Interior Minister Thomas de Maizière told ARD television on Thursday evening.
"We can already feel how the climate in Germany society is becoming more raw," he said.
The ring leaders of the marches are not true Europeans, he stressed, but conceding that the appeal of the protests was growing for many people: "The participants include many people who are expressing their concern about the challenges of our time," he added.
Colleagues of the minister have been far more direct.
Pegida's leaders are no less than "Nazis in pinstripes", insisted North Rhein-Westphalia interior minister Ralf Jäger.

Several marches have take place in the state and more were planned in Bonn, with right-wing extremist groups behind them all, Jäger said.
He was then rebuked by his equivalent in Saxony, Markus Ulbig, for tarring all protesters with the same brush.
Authorities had to react to the population's concerns "before the right-wing extremist Pied Pipers do with their muted slogans", added Bavaria's interior minister Joachim Hermann, apparently referring to a recent march by right-wing groups against Salafist Islamists in Hanover.
"Appeals for tolerance alone are no longer enough here," he said.
Bigger trouble brewing?
Dresden, Düsseldorf, Munich and other cities have in recent weeks seen Pegida marches, which mostly passed without serious incidents.
Counter demonstrations drew almost as many people in some cases, but police have generally been efficient in keeping the sides apart.
Waving German national flags and decrying "criminal asylum seekers" and the "Islamisation" of their home country, the Pegida marches have attracted hardcore neo-Nazis and also a small but growing anti-euro party, Alternative for Germany, or AfD.
The group's name is in itself "a veritable call to arms by far-right populists", evoking echoes of Christian crusaders and Nazi propaganda, said Hajo Funke of Berlin's Free University.
"It's about the mobilisation of resentment, about establishing an enemy. It becomes dangerous if it turns into contemptuous aggression and the awakening of mob instincts," the political scientist told AFP.
In its short period of existence, Pegida has grown and spawned smaller copycat groups nationwide, provoking much soul-searching in a country haunted by its history of Nazi terror and the Holocaust.

The protests have been fuelled by the sharp rise in refugees seeking political asylum in Germany in recent months, leaving states scrambling to house them in converted schools, office blocks and container villages.
Germany has received more than 180,000 asylum applications since January, a 57-percent spike from last year, mostly from conflict-ridden Syria, Afghanistan, Iraq, Eritrea and Somalia,as well as from several Balkan countries.
"We can't stay silent when xenophobic sentiments are being aimed at people who have lost everything and come to us seeking help," Justice Minister Heiko Maas said.
"We must make clear that these demonstrations do not represent a majority."
'Can't stay silent'
Experts on Germany's far-right have noted a new mainstream character to Pegida, likening it to anti-foreigner movements in France, the Netherlands, Austria and Greece.
Most of the marchers are not booted skinheads but disgruntled citizens, raising fears especially among immigrant groups that a societal taboo against expressing xenophobic sentiments on the streets is vanishing.
The home city of the protests, Dresden, was part of communist East Germany until the Berlin Wall fell 25 years ago, and the surrounding state of Saxony still lags western Germany in prosperity and jobs.
The AfD has also won seats in three state parliaments, spelling a growing challenge as a political newcomer on the right of Chancellor Angela Merkel's conservative Christian Democratic Union (CDU).
The CDU's annual congress in Cologne this week vowed to boost domestic security, crack down on foreign criminal gangs and pledged that "Salafist Islamic subversion will not be tolerated".
In an apparent echo of concerns voiced by many protesters, de Maizière also warned off hard-core Islamist elements seeking to destabilize Germany: "Jihadists should not be under any illusions: We are a tolerant country. But we will react with force and severity against any one who fights against our liberal state," he said at the congress.
He has also tried to allay fears of Islamisation. "There is no danger of an Islamisation of Germany – particularly not in Saxony," he said. The number of foreign-born residents make up just 2.2 percent of the population here.
'Looking for scapegoats'
The demonstrators' stated aim is to prevent their country from being overrun by dangerous jihadists and foreigners who refuse to "integrate".
But they also cheer and applaud speakers who voice broader grievances – against the "political elite", EU bureaucrats and the mainstream media they blame for allowing multiculturalism to "water down" their national culture. "We are the people," they regularly chant, co-opting the phrase of the original "Monday demonstrations" that led up to the 1989 fall of the Berlin Wall.
They have so far avoided clashes, with police or the anti-fascist protesters, such as the "Dresden Alliance Without Nazis", who show up in equal numbers.
By contrast, the separate group "Hooligans Against Salafists" fought street battles with police that left more than 50 officers injured in October in Cologne.
Police union chairman Rainer Wendt said that while riot police can handle football thugs, the bigger challenge stems from the new mass rallies of people "who voice this diffuse hostility, fear and resentment against anything foreign to them".
"Many of them have failed in their lives and their jobs and they project onto others their own failure… and are looking for scapegoats," he told news channel NTV. "We need to pay careful attention to them so they're not drawn in by the right-wing Pied Pipers."