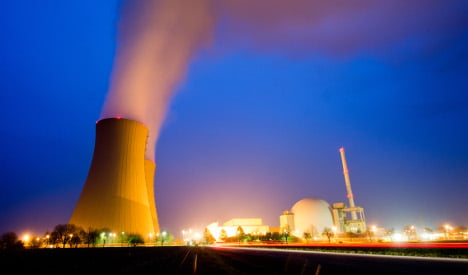 Blue skies for nuclear power again? Photo: DPA
In the first week, Maxenergy poached 3,000 customers from the competition after its new offer launch on December 1 – the day the UN climate change summit opened in Peru.
"Several hundred" applications were being received every day, a company spokesperson told Die Welt newspaper.
Generated and imported from two nuclear plants in Switzerland, the electricity isn't markedly cheaper than other options. But it is cleaner and safer, argues the company, which is a subsidiary of the Augsburg-based mineral oil trader Sailer.
Meanwhile, Germany's Association for Environment and Nature (BUND) condemned the offer as "immoral and scandalous", arguing that national energy policy should aim instead to become more efficient to meet demand, rather than generating more.
Safe or not?
The apparent rush to sign up would seem to fly against Germany's green face, especially after Angela Merkel's government pledge to give up nuclear energy after the 2011 Fukushima disaster in Japan.
But despite the legacy of this accident and those at Three Mile Island and Chernobyl, the company insists nuclear power is still the safer option: "There is a big difference between perceived and real threats," the spokesman said.
It also emphasizes the individual savings on emissions nuclear power consumers can make, claiming it reduces their carbon footprint on average by two tonnes of emissions a year to 20 kilos.
However, the initial enthusiasm for the nuclear supply doesn't denote a firm trend. Many customers make some savings by switching providers occasionally to benefit from newcomer offers.
And nuclear power providers in 2013 still saw their share of the German market fall from 17.6 to 15.4 percent, while coal accounted for 45 percent of German energy.
Germany last year burned seven percent more coal than in 2012, increasing its carbon dioxide emissions by two percent, or by 20 million tonnes of emissions.
Boost from emissions struggle
All of which complicates ongoing efforts to reduce CO2 emissions worldwide. Germany aims by 2020 to reduce its CO2 emissions by 40 percent compared to 1990 levels, and by 80 percent by 2050.
During this week's UN climate change summit in Peru, attended by ministers from 195 countries, environmental organisations criticised Germany for 'losing leadership' regarding climate protection in Europe.
According to their survey of 58 countries' progress in reducing their greenhouse gas emissions, the ecological groups Germanwatch and Climate Action Network said Germany has played a less constructive role in the European energy debate in the last year. This year they ranked Germany in 19th place, down from eighth place in 2013.
Amid international tensions over Ukraine, nuclear providers can also benefit from anxiety at Germany's heavy reliance on Russia for energy imports.
More than a third of Germany's oil and gas come from Russia, as well as one quarter of its coal. A quick restructuring to other sources like liquified natural gas imports from the United States is also not possible due to the infrastructure need.
But the 'clean' nature of nuclear power is also under closer scrutiny after a slew of recent reports about the amount of radioactive waste Germany must dispose of. Estimates were doubled recently, amid reports of dilapidated storage facilities where drums of radioactive waste had corroded so badly they couldn't be moved.
Meanwhile, Maxenergy's website highlights pro-nuclear statements by established ecologists.
"Nuclear energy is without doubt still the most effective and efficient way of reducing use of fossil fuel sources," it quotes Greenpeace co-founder Patrick Moore as saying.
From regarding nuclear energy as an 'evil' synonymous with nuclear war in the 1970s, Moore became an advocate of the power source after he left Greenpeace in 1986.
While it tries to balance the shift from nuclear power to other forms and still meet its emissions reductions, the German government is pushing energy saving as one avenue.
The Environment Ministry recently raised energy saving issues – and some eyebrows – with a racy energy-saving campaign aimed at young people.
SEE ALSO: Germany in the dock over climate inaction