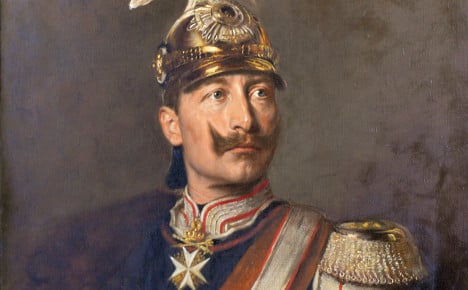 "Summoned to the palace to see His Majesty at 11 o'clock along with [Admiral Alfred von] Tirpitz, [Minister of War Josias von] Heeringen and General [Helmuth] von Moltke," Admiral Georg Alexander von Müller wrote in his diary for the day, now in the Federal Archives (Bundesarchiv) in Freiburg.

He found the Kaiser in a belligerent mood, expecting conflict in the Balkans to spread to the rest of Europe as the great powers became involved.

"If Russia were to support the Serbs, which she is apparently already doing… war would be inevitable for us," von Müller continues.

The Kaiser was working with his Austrian allies to convince Bulgaria, Romania, Albania, and possibly Turkey would join a future war on their side.

"If these powers ally themselves with Austria, it will free us up to throw our full weight behind a war against France", von Müller reports the Kaiser saying.

German leaders had previously believed that Russia would remain neutral if they went to war against France and England, but the outbreak of the First Balkan War in October 1912, in which Serbia, Greece, Montenegro and Bulgaria were fighting against the Turks, had dashed those hopes and shown they would need allies in the East.

'First I must take Paris'

Now the Kaiser knew that "If I am to march on Moscow I must first take Paris", as he had said in November 1912.

Plans had been updated, envisaging an attack against both France and Russia which the Germans hoped Britain would stay out of.

But on December 8th the Kaiser heard from his ambassador in London, Prince Lichnowski, who had spoken to the British Secretary for War Viscount Haldane.

"Haldane informed Lichnowski that if we attack France, England will come to France's aid, for England cannot tolerate a disturbance in the European balance of power", von Müller noted.

That meant that as well as planning for a land war in France and Russia, Germany would also need to make plans for battle at sea with the most powerful fleet in the world.

Von Moltke remembered the Kaiser saying that "the fleet will naturally have to prepare for war against England… immediate submarine warfare against English troop transports on the Schelde river or near Dunkirk, mine warfare up to the Thames."

Wilhelm ordered Tirpitz to prepare for the event by having more submarines built, but the admiral was circumspect.

"T[irpitz] called attention to the fact that the navy would gladly see a major war delayed by one and a half years."

But he was up against von Moltke, the Chief of the General Staff, who was gung-ho for war.

"I consider a war inevitable", he told the Kaiser. "The sooner, the better."

Von Moltke was concerned that the army would be at a greater disadvantage compared with Germany's enemies the longer war was delayed, as the country lacked the financial heft of Britain and France combined. The stalemate between army and navy meant the meeting ended with "almost no results", von Müller recorded.

"The chief of the general staff says: the sooner war comes, the better, however, he hasn't concluded from this that we should give Russia or France, or even both, an ultimatum that would trigger a war for which they would carry the blame."