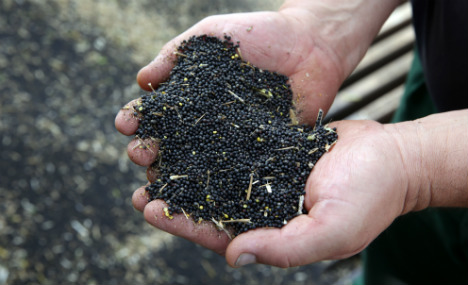 In the early morning,  the 31-year-old driver was forced from the cabin when a fire broke out on the truck.

"It appears to have started in the brakes – they were on too tight and generated heat over a period of time," a police spokesperson  from Ludwigsburg, just outside of Stuttgart in Baden-Württemberg, told The Local.

He added that this was an "one-off case" and had nothing to do with the make or model of the vehicle involved.

The driver escaped injury, but the silo tank containing the 25 tonnes of rapeseed granules burst due to the heat of the fire, spilling the cargo onto the motorway.

Four police cars, 25 firefighters and five medic vans were summoned to the scene, completely closing off the A8 near the Denkendorf rest stop.

The silo tank's contents had to be emptied completely and transferred to another truck. Police then had to bring in a special road-cleaning vehicle to deal with the oily residue left behind by the rapeseed.

"It was a mess, but there was only a slight danger to drivers due to the oily film that was left behind by the seeds," the spokesperson said.

The A8 was closed for nearly seven hours to deal with the fire and clean up the mess, resulting in a 15-kilometre traffic jam.

No further accidents were reported as a result.