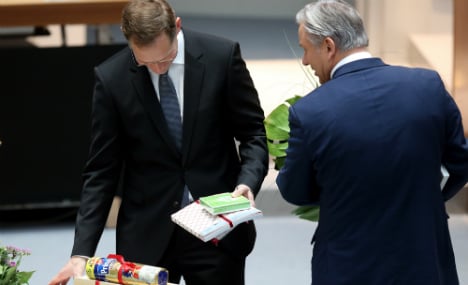 With 87 of the 146 votes in the senate, Wowereit's fellow Social Democratic Party (SPD) member was confirmed as Wowereit's successor. He garnered two more votes than the reigning SPD and Christian Democrat (CDU) coalition have seats.

The 61-year-old incumbent Wowereit held his post since 2001, but finally announced he was stepping down in June after years of scandal over the delayed development of the Berlin Brandenburg Airport (BER).

The airport was supposed to open in 2010 at a cost of €2.83 billion. A current opening date has yet to be scheduled, though current estimates by CEO Hartmut Mehdorn say 2017 or 2018. Costs have overrun to €5.4 billion, with a further €2.19 billion expected to be incurred before completion.

The scandal almost brings Wowereit's career, which started with a 2001 election called in the wake of another scandal, full circle.

Wowereit first entered mayoral office after being elected the district mayor for Berlin-Tempelhof at the age of 30, making him the youngest politician to be elected to the city legislature.

In 2001, following the Berliner Bank Scandal, in which the state-owned bank collapsed with billions of debt, Mayor Eberhard Diepgen stepped down, "Wowi" as he's affectionately know had worked his way high enough in the ranks to win the party's nomination.

Wowereit came out as gay in his 2001 mayoral campaign when he learned that tabloids were about to reveal his sexuality in print.

"I am gay and that is a good thing," Wowereit said as he publicly came out.

After a moment's pause, the announcement was met with cheering and applause at the SPD headquarters.

"… and that is a good thing" became a catchphrase associated with "Wowi". At the time of his resignation, he was the only openly gay mayor leading a major European city.

Later, in a 2010 interview with the US-publication, Time Magazine, Wowereit said that his coming out strengthened his campaign.

Throughout his career, he also became known for coining the unofficial tagline for Berlin, "poor, but sexy", which he said in television interview in 2004. To this day, it's hard to find a travel article about the German capital that doesn't reference the 10-year-old description of the city.

Despite the occasional flare-ups of discontent with Berlin's government, which include BER, rising rent prices, and the reconstruction of  the Prussian palaces at a cost of €552 million – adding to the city's record debt of around €60 billion – Wowereit kept getting re-elected.

In 2011, he started his fourth term after his party received a fresh majority.

His final day in Berlin's Rote Rathaus (Red City Hall) were marked with well-wishes and flowers from his colleagues. As he left, he said "Tschüss!" and someone answered "See you soon!" to which the outgoing mayor only responded with a "nö" in true Berliner form.

Wowereit is a life-long Berliner and lives with his partner of 21 years, neurosurgeon Jörn Kubicki.

Müller now has two years before the next Berlin city election to prove himself at the helm of Europe's second biggest city. He faces several challenges, not the least of which is the Wowereit's Achilles' heel, BER.