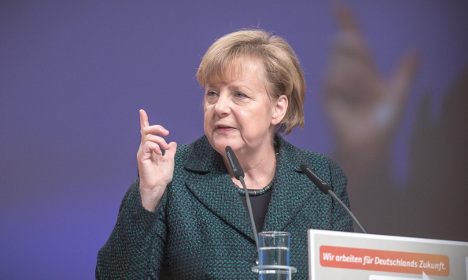 "Only a strong Union can make a national Red-Red-Green [SPD-Left-Greens] coalition impossible," the Chancellor told the gathering of the party faithful in Cologne.

Merkel chose to ride the wave of public anger at the decision of the SPD in Thüringen to enter a coalition with the Left [Linke] and the Greens.

It is the first time that the Left, which traces a direct lineage back to the East German Socialist Unity Party (SED), has taken control of a state in the reunified Germany, and many blame the SPD.

"How much smaller can the SPD make itself?" Merkel asked, accusing the centre-left party of "declaring bankruptcy".

In the future, she declared, the Union would look to form an alliance with the Free Democratic Party (FDP) – despite its disappearance from the Bundestag at 2013 elections.

The liberal party "is and remains our natural coalition partner", Merkel said.

And she regretted the fact that "some" in the Green party had not been prepared to enter a coalition with the CDU following the 2013 vote, which saw her party take an absolute majority in the lower house.

That was seen as leaving the door open for the two parties to work together in future.

Beyond coalition politics, Merkel told her members that the CDU should be "courageous", facing up to the effects of digitization on the German economy.

And she reminded them of what her government sees as its crowning achievement of passing a budget with no new borrowing for 2015.

Delegates stood to applaud Merkel for over 10 minutes after she had finished speaking.

Shortly afterwards, she received 96.7 percent of the vote to return as party president, just short of the high point of 97.9 percent she achieved in 2012. Merkel had interrupted a TV interview to take a break after feeling unwell on Monday, but was back at the height of her powers during her speech.

"The Chancellor felt unwell for a moment, but she ate and drank something and then went on with the interview," government spokesman Steffen Seibert said.

She went on to take part in a press conference later in the evening without incident.

Merkel was speaking to ZDF television on the fringe of the Christian Democratic Union (CDU) party conference in Cologne, which ends on Tuesday.

More than 1,000 CDU delegates from all over Germany are expected to re-elect Merkel, who still enjoys approval rating of 67 percent according to polling from public broadcaster ARD.

A survey by Bild am Sonntag found that 56 percent of Germans are in favour of a fourth term at the head of government for Merkel from 2017, when the next parliamentary elections are due.

"It's not the hurray-style of a Napoleon – but it's more successful."