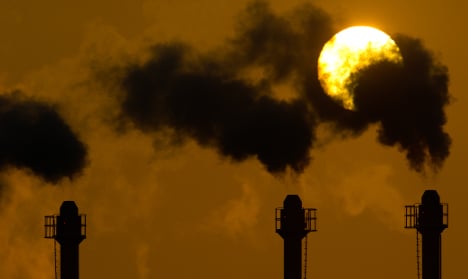 "Experts criticized the drastic reduction in the ambitions of the German government that led Germany to lose leadership regarding climate protection in Europe," authors from Germanwatch and Climate Action Network wrote.

"In the past year, [Germany] has played a less constructive role in the European energy debate," they went on.

Germany had "blocked urgently needed reforms of the European emissions trading scheme" and stopped moving forward with its transition away from polluting forms of energy.

The two NGOs asked 250 climate and energy experts from around the world to evaluate 58 countries on their level of greenhouse gas emissions and progress in reducing them.

They also looked at use of renewables, energy efficiency and climate policies.

The experts noted that "no country is doing enough to prevent dangerous climate change" and left the top three ranks in their table empty.

Germany dropped from eighth place in 2013 to 19th in 2014, mostly because of its policy interventions on the European scene.

And the country is burning more and more coal for power as it moves to eliminate nuclear energy by 2022, with the government divided on how to achieve that goal while reducing the country's emissions to meet European targets.

It's a thorny issue as the coal industry employs tens of thousands of German workers, who are organized into strong unions and form a critical voting bloc for junior coalition partners the Social Democratic Party (SPD). Ministers from 195 countries, including Environment Minister Barbara Hendricks, are meeting in Peruvian capital Lima from Tuesday to lay the groundwork for what is hoped to be a world-first global climate treaty.

They will discuss suggestions for policies that the UN hopes to include in a binding agreement to be signed in Paris in a year's time.

Development Minister Gerd Müller, who has also travelled to Lima, criticized the recent agreement on emissions reduction between the US and China.

"I don't see what Obama announced as ambitious," he told journalists on the fringes of the meeting.

The US has agreed to reduce greenhouse gas emissions by 26 to 28 percent compared with 2005 levels by 2025, while China has agreed to begin reducing emissions from 2030.

That compares poorly with EU targets to reduce emissions to 40 percent of 1990 levels by 2030.

Martin Kaiser of Greenpeace said that the Lima negotiations were achieving little because the delegates were getting lost in the details and opening up too many options without making decisions.

"We fear that the remaining time in Lima won't be used [to reach agreement]," he said.