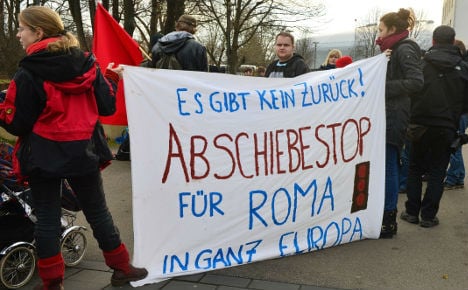 Demonstrators hold up a banner against Roma deportations in 2013. Photo: DPA

"According to current estimates, … a total of 230,000 asylum requests is within the realm of possibility," Manfred Schmidt, head of the Federal Office for Migration and Refugees, said in an interview with German regional newspaper Rheinische Post.

The 2015 estimate is based both on the amount of persecution occurring worldwide as well as how attractive applicants find Germany, which is the top destination in Europe for asylum seekers.

For 2014 German authorities have predicted 200,000 asylum requests, a 60 percent increase over 2013, which in turn saw nearly two-thirds more requests than the year before.

Fighting in Syria, Iraq and Afghanistan have caused the surge of refugees to Germany in the past few years.

German authorities have struggled to deal with the growing number of asylum seekers.

Across the country former army barracks and school buildings have been requisitioned and mobile housing and even tents set up to house the influx of refugees.