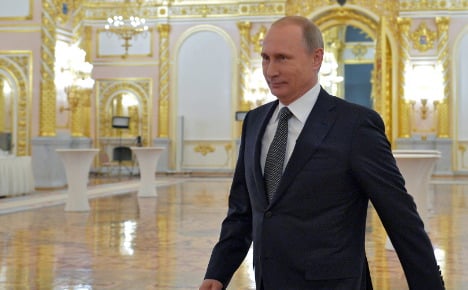 President Putin of Russia in the Kremlin shortly before his speech on Thursday. Photo: DPA

Putin said in his speech on Thursday that the Crimean peninsula was "just like the Temple Mount in Jerusalem for those of Jewish or Muslim confession" in its "civilisational and sacred meaning" for Russians.

German government spokesman Steffen Seibert said that this was a "religious exaggeration" that "doesn't justify in any way the breach of international law that Russia has committed through the annexation of the Crimea".

For the German government, the Crimea had been seen as a homeland by different peoples with different religions for centuries.

Seibert added that German policy was not directed against Russia, but rather aimed to clearly identify the annexation as a breach of international law and to collaborate in bringing about a diplomatic solution.

In a speech which Seibert described as having a "transparent domestic political motive", Putin further recalled the last time when Western Europe and Russia had come to open war.

"People should remember how it ended" when Hitler broke the Nazi-Soviet pact to invade the USSR in 1941, he said.

Putin uncharacteristically opened his speech by addressing the foreign policy crisis head-on, thanking his people for their "steadfastness" in the face of the economic sacrifices being asked of them during the Ukraine crisis.

Putin's speech came on the same day as the Social Democratic Party (SPD) called for a "United European Army" in a strategy document.

Referring to the pressure on military budgets in all European countries, Arnold said that there was "no alternative" to a division of military capabilities among member states. Critics note that France, which has emphasised military self-sufficiency since President de Gaulle, would be reluctant to join such a plan, and that collaborative projects such as the Eurofighter have come in hugely overdue and over budget in the past.