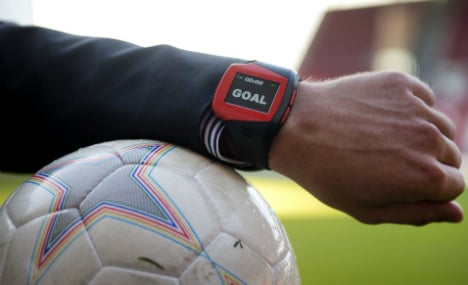 At the members' summit in Frankfurt on Thursday, 15 of 18 teams voted to introduce the technology, selecting the Hawk Eye system as their choice.

"I believe this is a step forward for German football league," said league president Reinhard Rauball.

Joachim Löw, who coached Germany to their World Cup win in Brazil this summer, approved.

"If I find any technical change or innovation good, then it's goal-line technology," said Löw.

"Everything else I don't really like, as the game should be left the way it is, but that's not the case with goal-line technology.

"There have been many refereeing decisions which have led to lots of discussions, so if you can get a quick and clear decision on a goal, thenthat's good."

The first round of voting on goal-line technology happened in March, where 24 of the 36 member teams voted against implementing it, mainly due to financial reasons. However, Thursday's vote only involved the premier-league teams.

Bayern Munich brought the proposal forward and before voting, a survey showed nine teams were for it. Some were still undecided. With the vote, the DFL also announced they would be using the Hawk-Eye system, which is already used in the English Premier League.

However, the CEO of the Aachen-based company GoalControl was taken by surprise of the DFL'S choice.

"We are shocked and bitterly disappointed," said Dirk Broichhausen told the Express newspaper.

Stadiums in Brazil were outfitted with the Goal Control system for the World Cup this past summer.

"Strange that Fifa trusts us, our system was used at the World Cup, but in the land of the world champions, an English system is being installed," Briochhausen criticized.