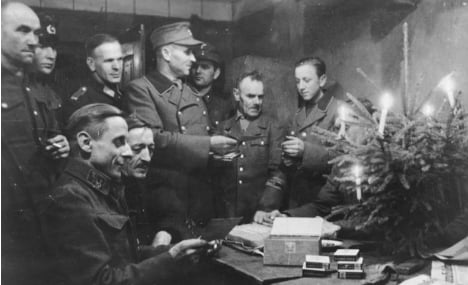 German soldiers gather around the tree in 1944. Photo: Bundesarchiv

“Have yourself a merry little Christmas, may your heart be light…”

As Michael Bublé croons, my daughter let out a heavy sigh. Rolling on the floor she whined, “When is Jingle Bell Rock gonna be on?”

Being the history teacher, as well as having played one of the sisters in Meet Me in St. Louis, I felt the need to explain the importance of this song to my seven year old.

“This song is from the Weltkrieg (the Second World War). It was a song that gave people hope in such a dark time.”

“Did Grandpa die in the Weltkrieg?”

“No, but your Great Grandpa died in the Weltkrieg. Your grandpa, Papa’s father, survived the war. Your other grandpa was still a young boy, so he didn’t fight in the war.”

“Oh mommy, I’m so glad we don’t have Weltkriegs anymore.”

The conversation got me thinking. All of my favorite Christmas songs are born out of World War II: White Christmas, I’ll be home for Christmas, Have Your Self a Merry Little Christmas, What are you doing New Year’s Eve.  All of them are slightly melancholy; all of them are rife with wishings for things untainted by the horrors of war.

Not that I don’t enjoy a good Christian Christmas carol – there is just something about these popular tunes that I identify with. Maybe it is because I am so far away from family during the holidays.

So what about Germany during the war years? Did they have popular tunes that reminisced about the Christmases of old?

Christmas time is sacred to Germans. It is the most holy, most important, holiday of the year. They even celebrate Christmas for two days: December 25th and 26th.

Here in lies the dilemma, the Nazi party wasn’t really pro-religion. They wanted people to be self-reliant, rather than be reliant on a belief system. And if the party was saying Jews were bad, it might be difficult for them to reconcile their political beliefs with their need to celebrate the birth of the King of the Jews.

The propaganda machine therefore had to churn out messages that focused more on Celtic or Norse winter rituals than typical Christian celebrations. Fire and light in the dark of winter replaced the traditional motif of Mary and the Christ child.

By far, the most popular Christmas tune of 1942 was Hohe Nacht der klaren Sterne (High Night of the Clear Stars) by Hans Baumann.  It was dubbed by the Reichsrundfunk (The Reich’s Broadcasting Company) as “the most beautiful Christmas song of our time.”

The song describes the clear night stars, fire, mountains, as well as the familiar image of a Mother and Child. But all in all, it was pretty secular and thus the song appealed to the Nazi Party.

Oh Tannenbaum was also a favorite with its focus on Nature rather than God. But the Nazi party still felt the need to change the word Weihnachtzeit (Christmastime) to Winterzeit (Wintertime).

In spite of the Nazi Party’s efforts to take the Christ out of Christmas, the Germans remained true to their traditions.

Christmas was still full of carols, candles, and gifts. Letters from soldiers on the front also spoke of their need for God at Christmas.

“The insignificance of everyday life pales against this, and we have never been more grateful for the Christmas Gospel than in these hours of hardship. Deep in one’s heart one lives with the idea of Christmas, the meaning of Christmas.

“It is a feast of love, salvation and pity on mankind. We have nothing else here but the thought of Christmas. It must and will tide us over grievous hours,” wrote Karl Binder, Deputy Chief Quartermaster, 305 Infanterie-Division in 1942.

In spite of how secular Germany may be becoming, Christmas is still a religious observance for most. This is much different from America where Christmas concerts have been replaced by Winter Solstice Concerts and Christmas parties in schools are called holiday parties.

Eventually my trip through the Christmases of the Weltkrieg led me here:

Now watch it again, but this time disregard the German language, the high mountain scenes, and the uniforms.  Just look at the people.   I got a little choked up actually. I know, I know. This was a propaganda film made to uplift the German Volk in the face of the harsh winter at Stalingrad and the losses at El Alamein.

But still: If you change the language and take away the uniforms, those people become us. They are we, not them. They are human. Regardless of which side of the battle lines, mothers still wanted their boys home for Christmas.

Kathleen Ralf teaches at an international school in Germany. This post originally appeared on her blog, Lehrer Werkstatt.