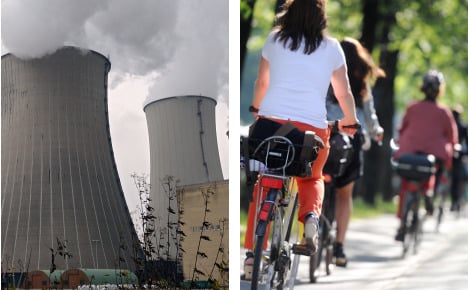 The plan would save an additional 62 to 82 tonnes of carbon dioxide (CO2) emissions on top of measures already announced, Hendricks said.

Energy efficiency and building insulation, paid for in part by tax breaks, are slated to provide the biggest chunk of the saving at 25 to 30 million tonnes.

Fossil fuel-burning power stations will account for 22 million tonnes of savings under new regulations to be legislated for in 2015.

And the government hopes to save up to 10 million tonnes in in transport, in part by encouraging more people to cycle by building new cycle paths.

But the plan quickly drew criticism from both Greens and pro-business politicians.

“A large number of the measures still haven't been audited and if we go by experience few of them will come out positively”, Green party MP and Environment Committee chairwoman Bärbel Höhn said.

“It's long past time for the government to rid itself of the illusion that it can save the global climate alone between Kiel and Konstanz”, FDP leader Christian Lindner said.

He argued that the coalition should target affordability and security of supply as well as emissions.

Until the new plan Germany had been expected to reduce its CO2 output by between 32 and 35 percent compared with 1990 levels, falling short of the 40 percent target agreed in 2007 between Gabriel, then Environment Minister, and Chancellor Angela Merkel.