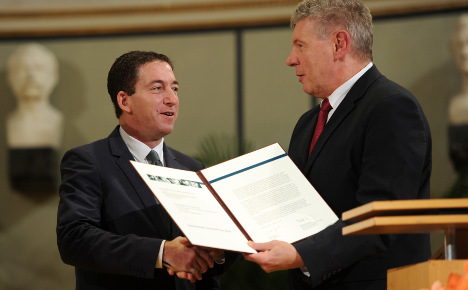 Greenwald summarized Snowden's revelations and the convoluted process he and the former NSA worker had to go through to make them public in his book No Place To Hide.

He showed “extraordinary courage” in the face of a “powerful surveillance apparatus that threatens to destroy our private sphere and the foundations of democracy,” the jury continued.

“With his articles and his book, Glenn Greenwald demonstrated what a free, independent journalism can achieve and what it should achieve”, they concluded.

"Even in our wildest dreams we didn't imagine having this impact," Greenwald said at the ceremony. The Scholl prize, awarded by the Bavaria branch of the German Publishers' and Booksellers' Association and by the city of Munich since 1980, includes a €10,000 award.

Criteria for the winner are “intellectual independence” and “support for civic freedom, moral, intellectual and aesthetic courage”.

It is presented in memory of Hans and Sophie Scholl, the brother and sister who in 1941 founded the “White Rose”, one of the best-known resistance groups under the Nazi dictatorship.

They produced anti-Nazi leaflets between 1942 and 1943, which were distributed in cities across Germany before the pair were captured and sentenced to death by a Nazi court.