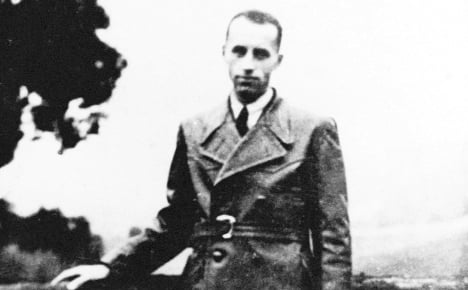 Zuroff said that according to a German intelligence officer, Alois Brunner "died four years ago in… Damascus," where he had fled seeking refuge decades ago.

The Wiesenthal Centre "could not confirm the information" for certain, he stressed, but given the 1912 birth year of Brunner, the unrepentant "right-hand man" of leading Holocaust architect Adolf Eichmann, he was in any case unlikely to be alive.

Brunner topped the Simon Wiesenthal list of wanted Nazis for deporting tens of thousands of Jews to death camps during World War II, although he was removed this year due to his age and almost certain death, Zuroff said.

After the war Brunner escaped detection by taking on a false identity and worked for two years for the US occupying forces in Germany, before fleeing to Egypt in 1954 and from there to Syria, where he was protected by successive
regimes.

He was pursued by Nazi hunters and survived assassination attempts allegedly by Israel's secret intelligence service, the Mossad.

"In Brunner's case, he got two letter bombs. He lost three fingers, he lost an eye, so I'm sure that didn't contribute to his (good) health," Zuroff said, in a veiled allusion to the Mossad. French investigators, trying to call Brunner to account for crimes committed during the occupation of their country, lost track of him in 1992 in Damascus, where he had been living under an assumed identity.

"He was a fanatic anti-Semite, a sadist and a person who was totally dedicated to the mass-murder of European Jewry."

Almost seven decades after World War II, the hunt for Nazi war criminals continues and the Simon Wiesenthal Centre publishes an annual list of those most wanted.

The current most wanted is Gerhard Sommer, a former SS lieutenant allegedly involved in the massacre of 560 civilians in August 1944, in Italy's Tuscany region.

He has been under investigation in Germany.In October, the Israeli branch of the Centre urged Germany to prosecute alleged members of Nazi death squads, giving it a list of 80 suspects.

It said the 76 men and four women whose names it provided to Germany's justice and interior ministries belonged to "mobile killing squads".

All of the suspects were born between 1920 and 1924, it said, making them "alive and healthy enough to face prosecution".

Zuroff, who heads the Los Angeles-based group's Jerusalem office, told AFP they believed two percent of "Nazi criminals" were still alive and that half of them could still be tried.