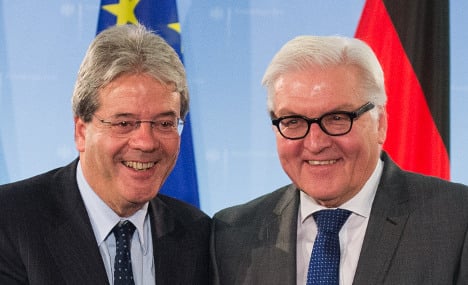 Frank-Walter Steinmeier and Paolo Gentiloni at a meeting earlier this month. Photo: DPA

“We want to and must go further than purely political or humanitarian measures that only give short-term answers,” they wrote in a joint op-ed for the Frankfurter Rundschau.

Strategies for reducing the pressure for people to flee had to be developed in partnership with countries of origin and “transit countries”, the latter especially on the Mediterranean coast, they said.

Many African countries, especially in the Horn of Africa, needed help to improve their education and health systems, Steinmeier and Gentiloni wrote.

And both foreign ministers agreed that “the socio-economic and legal conditions of refugees and migrants have to be improved in countries passed through by migration routes.”

Host countries needed to be equipped to offer state services like education and health to migrants, they said.

Representatives of 58 European and African states are currently meeting in Rome to discuss refugee policy for the coming years.

On Friday, the parliament announced that the federal and state governments came to a last-minute settlement on financing refugee settlements in Germany. With the agreement, the state has confirmed the EU mobility law and the rights of asylum seeker's to access social services.