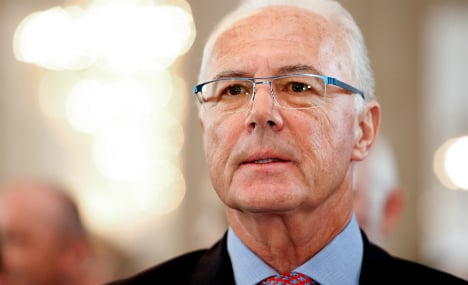 Is the Kaiser tarnished? Photo: DPA

Beckenbauer was an executive committee (exco) member in 2010 when Fifa made the controversial announcement that Russia had been awarded the 2018 World Cup tournament and Qatar the games in 2022.

Last week, lead investigator Michael Garcia and Hans-Joachim Eckert, the German judge charing the ethics committee that Fifa set up to investigate itself, announced that they were looking into individual current and former exco members as part of its process.

Several media outlets are now reporting that Beckenbauer is among those being probed, including Angel Maria Villar Llona (Spain), Michel D'Hooghe (Belgium) and Thailand, as well as a former member from Chile.

Also under suspicion is prospective Fifa presidential candidate Harold Mayne-Nicholls, who was in charge of the pre-decision inspection of prospective hosts for the 2018 and 2022 tournaments.

There is no word yet on why Beckenbauer, who won the World Cup with West Germany in 1976 and again in 1990 as manager, has come under Garcia's gaze.

According to Die Welt, which credits "Fifa insiders", Llona has refused to cooperate with the Fifa investigation. He has refused to answer questions about events before and after the vote that took place in Zurich in December 2010 – events which may have violated Fifa's ethical standards.

After the decision was made, D'Hooge's son was given a job at a Qatari hospital, the Telegraph reported, though the Belgian told BBC Sport that "I was and am convinced that my answers completely clarified the whole situation, the more that I have nothing to hide."

Earlier this month, Eckert released a summary report into the investigation, which was blasted by Garcia as "incomplete and erroneous".

In last week's joint statement, the adjudicatory chamber of Fifa's ethics committee said it would submit its conclusions to Fifa's audit and compliance committee. It would then be up to its head, Domenico Scala, to decide how much will be released.

On Friday, Bayern Munich's president Karl Hopfner added his voice to the chorus of those who want to see the whole report into the investigation that has so far lasted the better part of two years and cost around €7.5 million.

"If there is evidence that (the 2022 World Cup in Qatar) tournament was awarded in a suspicious manner, than the Fifa executives should decide: We cannot play a World Cup herem," he told the Süddeutsche Zeitung.

Fifa President Sepp Blatter has been insistent that the report cannot be published in full for legal reasons.