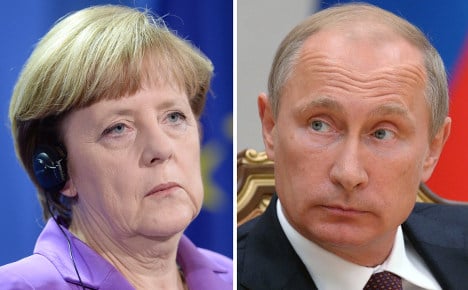 “Farewell to Ostpolitik” was how The Guardian described Angela Merkel's new-found hard language on the Ukraine crisis in her speech at the Bundestag debate on the government budget.

The British paper was referencing the policy begun under Social Democratic (SPD) Chancellor Willy Brandt in 1969 of dialogue with the Soviet Union and the former East German Democratic Republic (GDR) as a means of changing the Eastern Bloc.

“Russia Understanders” like former Chancellor Gerhard Schröder – who has called Putin a “flawless democrat” and this year invited him to his 70th birthday party – and close business links with Russia have inhibited Germany standing up for its democratic values in the face of Vladimir Putin.

But Merkel's speech on Wednesday, coming hard on the heels of a tough address to the G20, is seen by many as marking a turning point.

“There must be no 'either-or' between Eastern Partnership countries with the European Union and Russian efforts for a closer partnership with those countries,” she told MPs.

“Nothing justifies the annexation of the Crimea by Russia.

“Nothing justifies or excuses the direct or indirect involvement of Russia in fighting in Donetsk and Luhansk.

“Russia is disdaining the territorial integrity of Ukraine… Russia's behaviour is calling peaceful order in Europe into question and breaking international law.”

But Merkel's promises of political and economic support for Ukraine and tough diplomatic talks with Russia in a strategy requiring “patience and staying power” weren't uniformly supported by lawmakers.

For the far-left party, it was Merkel “poisoning the political climate and endangering freedom in Europe” with a “senseless economic war” using sanctions against Russia.

It appears, though, that Left politicians are fighting a losing battle to soften German policy towards Putin.

Even fellow opposition party the Greens support the sanctions against Russia, with leader Anton Hofreiter saying that “in this situation Europe can only act decisively”.

And a public poll in August showed that 80 percent of Germans thought Russia “had a large part of the responsibility for the escalation of the situation in the Ukraine.”

A large majority – 70 percent – thought that the EU's imposition of sanctions was the right thing to do, while 62 percent thought “more decisive” action was necessary to contain Putin.

Merkel was profiled by two major US magazines this week – Vanity Fair and the New Yorker.

While they have mixed conclusions about Merkel's style and impact at home, both agree that she has brought a unique and often successful approach to her country's foreign policy.

The New Yorker describes how Merkel's strategy against Russia can be interpreted as “waiting for her adversary to self-destruct”. “He's afraid of his own weakness,” she once said of a typical Putin power play after he tried to frighten her with his dog at a conference.

“Russia has nothing, no successful politics or economy. All they have is this.”

The wait-and-see strategy might well pay off if The Economist's latest forecast of the crises threatening the Russian economy .

For Vanity Fair, things are even simpler.

Merkel, “who wants nothing to do with being seen as a 'female' leader, has become The Man striding across the global stage”, they write, noting that she has “acquired more power” than any of her storied male predecessors in the Chancellery.

This moment of confrontation with Russia and shouldering of responsibility for other international crises may be the moment Germany gets “the go-ahead to wake up – slowly, cautiously, meticulously – after seven decades of slumber.”