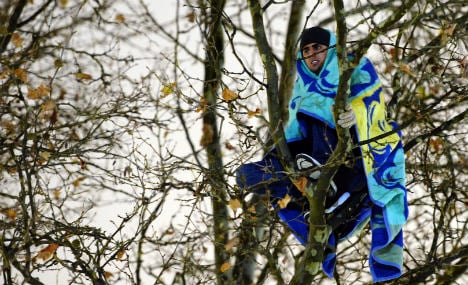 Refugee protestors spent the night in a tree in Munich's Sendlinger Tor after dozens of police were ordered to clear the five-day outdoor hunger strike on Wednesday night.

Those who still had strength, went up and one paper reports there are still some continuing their protest among the branches.

PHOTO GALLERY: Refugees take protest to the trees in Munich

A police spokesperson told the Münchener Abendzeitung that police broke up the square after physicians advised the city administration there was a great risk of hypothermia to the protesters.

The refugees have refused all food since Saturday in their fight for their right to stay in Germany.

On Wednesday they announced that they were upping the ante of their protest by also refusing liquids.

The district administration unit (KVR) said that after the escalated action on Wednesday, more protesters were being brought to hospitals.

"The rapid escalation was surprising for us," said Wilfried Blume-Beyerle, head of the KVR.

Dozens of police and first respondents came to the square where the protests were happening to clear out the protests in the Baavarian capital, where temperatures dropped to three degrees over night.

Police also announced that congregating on the square was now forbidden. The end of the hunger strike comes as the Stuttgarter Zeitung reports that the government is re-allocating billions of euros unspent in aiding reconstruction after the 2013 flooding disaster. The costs of repair proved to be far less than the €8 billion the state allocated to the disaster fund.

According to the report, the federal government will make a final decision regarding the money in December, but most are in favour of using the money to ease states burdened with rapidly growing refugee populations.