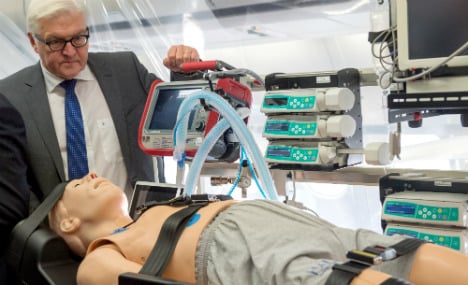 Foreign minister Frank-Walter Steinmeier was on the tarmac in Berlin for a tour of the converted A380-300.

"We have to acknowledge that the international community has done too little, too late. We are thus challenged to do everything possible," the Social Democrat (SPD) politician said after his tour.  "This is probably the only Lufthansa plane that we hope to use as little as possible."

PHOTO GALLERY: Take a tour of the "Robert Koch" jet The medevac plane will be a welcome relief to aid efforts, as the current fleet of planes specialised to handle Ebola patients is all of two Gulfstream jets, both owned by Phoenix Air.

Inside the plane is a plastic tent, which can be hermetically sealed into a "special isolation unit". It allows patients being flown out of western Africa to be treated en route.

The plane has been leased by the federal government from Lufthansa for six months with the option of a three-month extension.

Authorities named the plane "Robert Koch" after the German pioneer of microbiology. Koch is best known for his work in identifying what causes tuberculosis and cholera. He also discovered how anthrax turns deadly.

Germany has 10 Ebola beds in hospitals across the country. The most recent patient to arrive at a German hospital is on his way to recovery.

In other news, American outlets are reporting promising results in the human trial of an Ebola vaccine. A similar trial, though for a different vaccine, is underway in Hamburg.

Germany has pledged €102 million in the fight against the epidemic, which has risen to almost 16,000 cases according to the latest figures from the WHO.