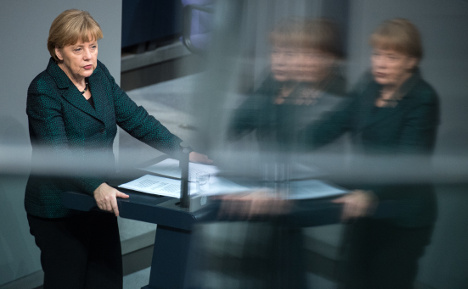 "Investment is important… but what's important above all is which projects" it is ploughed into, she said.

New EU Commission chief Jean-Claude Juncker earlier on Wednesday unveiled a €315 billion investment plan to "kickstart" the economy, saying it would show the world that Europe was back in business.

The proposal must still be approved by European leaders in December but would entail an investment fund and a scheme to match new projects with private money.

But he also stressed the need for some EU member states to undertake structural reforms and said money alone was not enough.

The Federation of German Industry (BDI) also welcomed the Juncker plan, saying it was the first step in the right direction, but must be combined with structural reforms.

The new European Fund for Strategic Investment will be funded from the EU's budget and from the European Investment Bank, although the door is open for direct contributions from member states.

Merkel indicated that Germany would probably not be in a position to offer much financially.

Europe's biggest economy is due to approve its draft 2015 budget later this week foreseeing a balance of its public finances for the first time since 1969.

"And that will also apply for the coming years," Merkel said, adding that Germany had lived beyond its means for years, which it plans to bring to an end.

Berlin earlier this month said it planned an additional €10 billion in public investment by 2018, amid calls by some EU partners to do more to help the eurozone economy.

"It's thanks to budgetary discipline that we can invest," Merkel told the Bundestag.