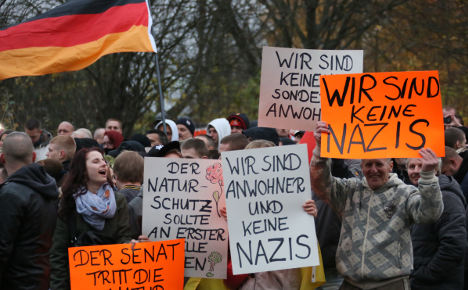 Demonstrators against the refugee home plans in Marzahn on Saturday. Photo: DPA

Left-wing newspaper taz noted the argument of conservative Berlin politicians that ordinary people's concerns had been hijacked by extremists, but couldn't agree that they were unknowingly instrumentalized.

"It's questionable whether this, without the involvement of the organized far-right, would have led to the weekly aggressive marches," the paper argued.

It also noted that the people at the heart of the demonstrations, from those running Facebook pages to speakers, all have close links to the far-right scene, including the National Democratic Party of Germany (NPD).

The paper went further, pointing out that "far-right phrases are called out at the demonstrations, loudspeakers play music from known Nazi bands, neo-Nazi symbols can be seen on the stewards' clothes".

The Süddeutsche Zeitung (SZ) agreed, finding that "what comes out of the loudspeakers at the demo is 'Germany for the Germans' in all known variations".

The SZ added that the demo's title was changed shortly before the start to "Together we are strong" – echoing the name of the "Hooligans against Salafists" rally in Cologne which ended in street battles with police. Zeit called the anti-refugee demonstrators "a mixed crowd of far-right radicals, elderly locals and young people with lower-lip piercings and dyed blond hair", noting the former's intimidating attitudes and hostility to being photographed by press.

Berlin's Tagesspiegel commented that "the asylum theme unites the [far-right] scene, the NPD, the splinter party "The Right", free gangs and hooligans. Their collective goal: to link up with insecure inhabitants. To exploit widespread resentments and fear of foreigners".

But the Tagesspiegel also notes that more than a third of people in recent polls said they had "serious or very serious problems“ with the idea of a refugee home being set up near them, despite regular debunkings of myths like increased crime or lower property prices nearby.

While Marzahn-Hellersdorf may be a stronghold of far-right politics in the typically left-wing capital – 3.9 percent voted for the NPD at 2013's general election – and even though more counter-demonstrators turned out to shout down anti-refugee sentiment than "concerned residents" appeared to protest against the homes, it would be a mistake to think racial tensions are so limited or so easily solved.

Ignoring the problem, minimizing it, or believing that the same old methods will keep it at bay aren't going to be enough in future. Leaders are going to have to find new ways to allay people's concerns while keeping to the values that have made modern Germany what it is.